You Don't Need a Title to Be a Leader How Anyone, Anywhere, Can Make a Positive Difference 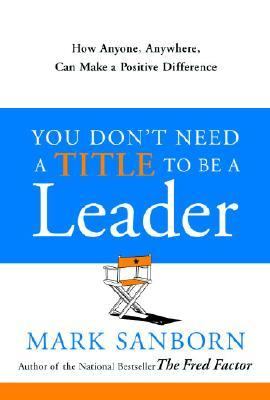 THEY DIDN'T NEED A TITLE TO BE LEADERS (AND NEITHER DO YOU) ANDREA A famous politician once said, "The longer the title, the less important the job." If that's true, then Andrea Stoller has a very important job indeed. Just ask anyone who has had contact with her at the school where she has worked for the past fifteen years. Andrea is not a licensed teacher. In fact, Andrea Stoller has no real "title" at all. What does she do? Nearly everything. She wears dozens of hats, including that of accountant, nurse, receptionist, secretary, admissions coordinator, supply coordinator, and counselor. And although she doesn't have an official title, her favorite is the one that nearly 200 students give to her every year. They call her "Mom." I'm convinced that at the heart of every successful organization is a title-less person or persons just like Andrea. One day, Andrea received a phone call informing her that one of the students, coming home from soccer practice, had been in a fatal car accident. When the teenage girl had gotten out of her car, an older man driving another car accidentally hit her, killing her instantly. The tragedy was devastating for the girl's family and classmates, as well as for the young man she had been dating at the time, Simon. After the accident, Simon sunk into a deep depression, avoiding people and falling behind in his schoolwork. It seemed as though he would become collateral damage in the tragedy. Andrea spotted the signs of his depression and attempted to befriend him. She offered to help him with his class work and tutor him, despite the fact that she didn't have a teacher's degree. At graduation, everyone applauded when Simon walked to the dais to give the commencement address. In his speech, he specifically thanked Andrea for helping him to graduate. Today, the young man who nearly lost hope when he lost his high school sweetheart is a nationally recognized skateboarder. He regularly encourages other students, just as Andrea encouraged him. Given Andrea's stature at the school, it's not surprising that many students choose to use one of their class electives to serve as office aides with her. Not only do they learn good office skills from her, but they know they will receive much-prized one-on-one time with her. She listens to them, advises them, and cares for them when they are sick or need help. In fact, she has such a kind, understanding heart that even parents have come to her with their own problems (divorce, issues with their kids, etc.). One summer the local junior high burned down. As a result, the school where Andrea worked needed to create more space quickly to house extra students. The school decided to add several modular buildings to its campus. With necessary last-minute construction and repairs to be done, Andrea and her husband worked late into the evening for weeks, staying until midnight at times, in order to be ready for the building inspectors so school could open on time. Andrea even found a temporary location for those classes whose rooms were not yet approved by the time the school year startedthe church she attends offered to let the school use their facility for several weeks. And, as a result of Andrea's "negotiations," the school paid very little to rent the facilities. Andrea Stoller still doesn't have a title. But she leads and influences others in significant ways every day. WHAT GOOD IS A TITLE? In today's world, much is made of a person's title. Yet little actual power exists in a title alone. I once did a survey on my Web site about the reasons people had for acting as leaders. One woman replied, "I want to be Ruler of tSanborn, Mark is the author of 'You Don't Need a Title to Be a Leader How Anyone, Anywhere, Can Make a Positive Difference', published 2006 under ISBN 9780385517478 and ISBN 0385517475.