You Don't Love Me Yet 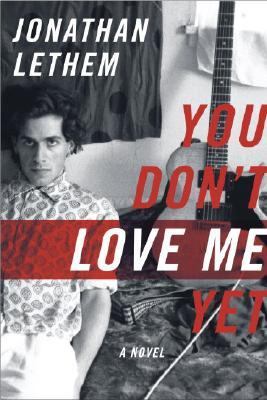 one They met at the museum to end it. There, wandering through high barren rooms full of conceptual art, alone on a Thursday afternoon, Lucinda Hoekke and Matthew Plangent felt certain they wouldn't be tempted to do more than talk. Too, driving into the canyon of vacated plazas of downtown Los Angeles felt suitably solemn and irrevocable. The plan was not to sever as friends, or as bandmates, only as lovers. Lucinda saw him first. A tall, malnourished vegetarian, Matthew was obliviously handsome, leadsinger handsome. He was dressed as for his work at the zoo and for the band's practices, in black turtleneck, jeans, and speckless suede work boots, which Lucinda knew he kept in his locker when he entered the animals' habitats. Matthew had presumably been excused from his veterinary nursing duties for the afternoon, or possibly it was his day off. For the past four years Lucinda had been assembling espresso drinks and clearing dishes at the Coffee Chairs, but she'd quit her job the day before, part of the same program of change that included this final rupture with Matthew. Instead, to pay her rent Lucinda had agreed to work for her friend, Falmouth Strand, in his storefront gallery. On her way into the museum Lucinda had paused at two heroic pillars of neon, mounted on either side of a doorway, and seen only versions of herself and Matthew: discrete, sealed, radiant. Now, sighting Matthew, she felt her senses quicken, her balance shifting to her toes. He squinted warily at a television monitor on a white pediment, some sort of video art. Perhaps it was the case that for him, as for her, everything in the museum had been reduced to an allegory of their dilemma.Exhausted by the old tug of his beauty, his scruffy intensity and lean limbs, Lucinda was ready to send Matthew and his allure out voyaging elsewhere. She joined silently to his side, the tiny hairs of their arms bristling together electrically. The two wandered like zombies through the exhibition, hesitating for a long while at a pair of basketballs floating perfectly suspended at midpoint in a glass water tank. "The thing is we've done this so much before we're too good at it." Matthew's gaze remained fixed on the tank. "You mean there's nothing to say." "Yes, but also we don't believe it's real because we've fallen back together so many times afterward. We need to make a difference between this time and all those others." "This time we're serious, Lucinda." "On the other hand, the advantage to so many practice breakups is we know we still like each other, so we don't have to worry that we're not going to be friends." "Yes." "The band will be okay." "Yes." "If we seem like we're barely speaking to each other Denise and Bedwin will be completely confused. We can't let the band worry about us. Bedwin's fragile enough as it is." "Yes." "Is something else wrong?" "It's nothing. There's a sort of crisis with one of the zoo's kangaroos, that's all." "You were thinking about a kangaroo just now?" "I just kind of wish we were in someplace more private so I could hold you and maybe just kiss you a little bit." His dark woeful eyes flitted past her, as if hounded. "I feel like I can't even look at you." "I feel the same way, but that's the point. We have to stop now, change our patterns." "I should stopLethem, Jonathan is the author of 'You Don't Love Me Yet ', published 2007 under ISBN 9780385512183 and ISBN 038551218X.