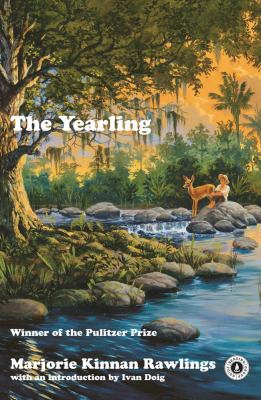 Introduction by Ivan Doig Her name was Lana, and she came to the ranch house like the doe-eyed orphan she was, cradled in the boss's arms minutes after her hay-hidden mother had fallen victim to his mowing machine.A fawn all velvet and delicate, a human heart or two melting over its helpless beauty, an impulsive adoption: hadn't we seen this before, in these very pages, or at least at the Saturday-night show in town to sop in the Technicolor version of Marjorie Kinnan Rawlings's emblematic novel?Maybe we overlooked the component of truth in fiction. Maybe we figured that Rocky Mountain deer were literally loftier creatures than the Florida backwoods species of flag-tailed mischief so memorably depicted in The Yearling. Maybe a pretty face just always wins its way in. In any case, the specific tribulations that were visited upon scrub-country settlers Ezra and Ora Baxter and their pet-smitten twelve-year-old son Jody in the book and movie could not afflict us. The sheep ranch we were on, covering one entire corner of the county, could not be eaten to the ground by a single munching adolescent deer, and the fawn was granted plenty of elbow room of another sort: she was the plaything of the boss's wife, a bored town-born woman accustomed to better stuff than any of us, including her husband, were made of. We of the ranch crew recognized status when it raised its head, and the wife there in the big house bestowed it on the orphan fawn as unmistakably as the star-power name she gave it. Even so, trouble came with Lana.Back there half a century ago I was, as Marjorie Kinnan Rawlings might have put it, "Jody-age." As the tolerated offspring of hired hands -- my father was the foreman, my grandmother the ranch cook -- I tagged along on anything, and watched with interest when the long-legged wildling bounded forward in the pen with the bum lambs at bottle time. The first few times the boss's wife did the feeding herself, then the white-mustached choreboy was given the task, and whenever he was deployed into the hayfield, my grandmother none too willingly had the fawn added to her victualing duties. I bottle-fed it myself a few intrigued times, but my heart wasn't going out to anything that was so obviously not mine. Besides, Lana was already surprisingly bossy.So I was able to stand back when, in the fullness of time, this gamin creature turned on us, we of the human kind. As she grew, Lana developed hooves like terrible knives in a fable, dark obsidian blades that suddenly, treacherously, were in front of your face. Her time among us ended when she slashed someone's shirt from collar to bellybutton. Just as it was written in that renowned story whose message we did not heed, nature had overcome nurture.That this incident leaps to mind the instant I am in the vicinity of these pages testifies, I think, to the uncanny staying power of The Yearling. Any of us who are former children -- I have in mind here that boss's wife, impelled to that dazzler of a fawn by some smoldering yearning, its outbreak likely as startling to her as it was to us, for whatever pet she had or did not have as a girl -- harbor in some corner of our memory an extreme case of wanting, such as Marjorie Kinnan Rawlings portrays in Jody Baxter. A child of his place and time, America when it was raw and rural and barely healing from the Civil War, the boy in the isolation of the Baxter's Island pinspot of clearing in the central Florida scrubland looks to nature to provide him the creature of companionship he so badly wants. In a wording that is as telling as it is curious, the author has Jody struggle to enunciate his craving for a pet: "I want something with dependence to it."It gives away nothing to say that dependence/independence are twinned throughout The Yearling, and that, piquantly singular as the title is, the story rapidly becomes the tale of two yearlings, two groRawlings, Marjorie Kinnan is the author of 'Yearling', published 2002 under ISBN 9780743225250 and ISBN 0743225252.