by Leeming, David A. 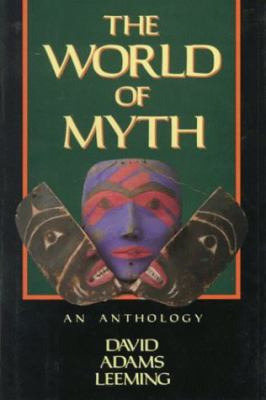 by Leeming, David A.

Hercules, Zeus, Thor, Gilgamesh--these are the figures that leap to mind when we think of myth. But to David Leeming, myths are more than stories of deities and fantastic beings from non-Christian cultures. Myth is at once the most particular and the most universal feature of civilization, representing common concerns that each society voices in its own idiom. Whether an Egyptian story of creation or the big-bang theory of modern physics, myth is metaphor, mirroring our deepest sense of ourselves in relation to existence itself. Now, in The World of Myth, Leeming provides a sweeping anthology of myths, ranging from ancient Egypt and Greece to the Polynesian islands and modern science. We read stories of great floods from the ancient Babylonians, Hebrews, Chinese, and Mayans; tales of apocalypse from India, the Norse, Christianity, and modern science; myths of the mother goddess from Native American Hopi culture and James Lovelock's Gaia. Leeming has culled myths from Aztec, Greek, African, Australian Aboriginal, Japanese, Moslem, Hittite, Celtic, Chinese, and Persian cultures, offering one of the most wide-ranging collections of what he calls the collective dreams of humanity. More important, he has organized these myths according to a number of themes, comparing and contrasting how various societies have addressed similar concerns, or have told similar stories. In the section on dying gods, for example, both Odin and Jesus sacrifice themselves to renew the world, each dying on a tree. Such traditions, he proposes, may have their roots in societies of the distant past, which would ritually sacrifice their kings to renew the tribe. In The World of Myth, David Leeming takes us on a journey "not through a maze of falsehood but through a marvellous world of metaphor," metaphor for "the story of the relationship between the known and the unknown, both around us and within us." Fantastic, tragic, bizarre, sometimes funny, the myths he presents speak of the most fundamental human experience, a part of what Joseph Campbell called "the wonderful song of the soul's high adventure."Leeming, David A. is the author of 'World of Myth' with ISBN 9780195056013 and ISBN 0195056019.