Waste Land and Other Poems 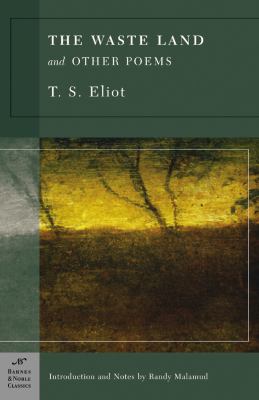 From Randy Malamud's Introduction toThe Waste Land and Other Poems If we regard Eliot's first two collections as thesis/antithesis, then the synthesis was accompanied by (and probably in many ways facilitated by) a personal breakdown in 1921.The Waste Landis a record of the poet's collapse, as well as the sign of his recovery. As he traveled back from Switzerland, where he had undergone treatment, to resume his life in England, Eliot left a draft of the poem in Paris for Ezra Pound to edit. The poem records a nervous breakdown, but more importantly it recounts how the poet imposes a sense of order, coherence, and direction on the cacophonous chaos of the breakdown. Explicitly, the breakdown inThe Waste Landis meant to be the breakdown of Europe, but increasingly critics have come to realize that it is also the very personal account of Eliot's own psychological distress. In part III, for example, he writes, "'On Margate Sands. / I can connect / Nothing with nothing.'" The beach at Margate was where Eliot had vacationed, following a friend's advice, in an attempt to avert his breakdown; but the holiday did not ameliorate his situation and prompted him to seek the therapeutic assistance of a Lausanne psychologist, Dr. Henri Vittoz. And when the voice of the poem states (in an unusual first-person address) in line 182, "By the waters of Leman I sat down and wept . . ." Eliot is describing the simple, powerful nadir of his breakdown: Leman is the old name for Lake Geneva, which Lausanne overlooks. Although Eliot always resisted autobiographical readings of art, the poem inescapably invites such readings. In the closing lines, when Eliot writes "These fragments I have shored against my ruins," it seems impossible not to read that as a description of how Eliot's embrace and desperate association of the shards that comprise the poem have helped to stave off his psychological "ruins." The act of assembling these pieces of the European cultural tradition served as a bulwark against the intellectual collapse--in both his public and private worlds--that seemed so imminent. On the national level, the breakdown Eliot envisioned was a consequence of the state of Europe during and after the Great War. More personally, the poem can be read as an account from the trenches of a poet who, though he didn't actually fight in that war, fought and survived his own metaphorical war. (Critics have speculated that Virginia Woolf's Septimus Smith, the shell-shocked poet manque inMrs. Dalloway, was at least loosely inspired by her erstwhile friend Tom.) The Waste Landachieves a synthesis between the free-floating observations ofPrufrockand the anguished, surreal pretensions ofPoems 1920. The philosophical/intellectual praxis of Eliot's modern epic is less gratuitous, and more pragmatic, than what he propounded in his previous collection--still difficult and harsh, certainly, but in a way that lent itself (at least for Eliot's initiates, his devotees) to solving, working through. IfPoems 1920was (and was meant to be) off-putting,The Waste Landwas somehow, despite itself, addictively compelling. The themes, the tropes, the images, the aesthetic that Eliot created in that poem are still going strong, inescapably etched into our cultural consciousness nearly a century later. (For example, it is virtually impossible to read any newspaper in any April without a headline recalling that it is "the cruelest month.") Eliot postulated that the modern landscape looked harsh, hostile, crazy, fragmented, with the monuments of the past tormenting us amid our present unworthiness and inadequacy,Eliot, T. S. is the author of 'Waste Land and Other Poems ', published 2005 under ISBN 9781593082796 and ISBN 1593082797.