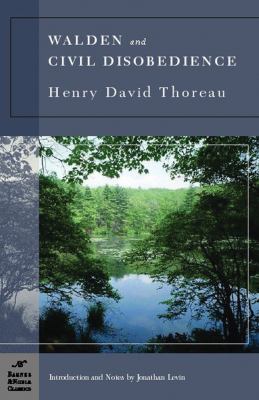 From Jonathan Levin's Introduction toWalden and Civil Disobedience In the summer of 1845, Henry David Thoreau moved into a small cabin he'd built near the shore of Walden Pond, about a mile and a half south of his native village of Concord, Massachusetts. Although Thoreau's experience over the next two years, two months, and two days could hardly be considered a wilderness adventure, it did nevertheless constitute a significant departure from the norm. Most of his neighbors, at least, thought he was a little bit crazy. As Thoreau suggests in the early chapters ofWalden, he set out to conduct an experiment: Could he survive, possibly even thrive, by stripping away all superfluous luxuries, living a plain, simple life in radically reduced conditions? Besides building his own shelter and providing the fuel to heat it (that is, chopping his own firewood), he would grow and catch his own food, even provide his own entertainment. It was, as he delighted to point out, an experiment in basic home economics; but in truth, his aim was to investigate the larger moral and spiritual economy of such a life. If, as he notes in the book's first chapter, the "mass of men lead lives of quiet desperation," perhaps by leaving it all behind and starting over on the relatively isolated shores of Walden Pond he could restore some of life's seemingly diminished vigor. Indeed, there is plenty of undiminished vigor on display in these pages. Nathaniel Hawthorne in his journal described Henry as "a young man with much of wild original nature still remaining in him" (Hawthorne,The Heart of Hawthorne's Journals, p. 105; see "For Further Reading"), and readers have often since regarded himalong with Walt Whitmanas something like the wild man of nineteenth-century American literature. Few readers ever forget the start ofWalden's "Higher Laws" chapter: "As I came home through the woods with my string of fish, trailing my pole, it being now quite dark, I caught a glimpse of a woodchuck stealing across my path, and felt a strange thrill of savage delight, and was strongly tempted to seize and devour him raw; not that I was hungry then, except for that wildness which he represented". In many respects, Thoreau went to Walden in search of the raw, hoping that an infusion of "savage delight" would cure him and (by the example he would provide) his neighbors of what he regarded as over-civilization, which he linked to timidity and uncritical faith in the authority of others. ThroughoutWalden, and indeed throughout the greater part of his writing, the impulse to simplify conditions and cast off the debilitating and dispiriting obligations of a respectable life is bound up with this pursuit of uninhibited, unadulterated wildness. His admiration for wildness in nature was unbounded. "Life consists with wildness," he comments in the popular talk now known to readers as "Walking." "The most alive is the wildest. Not yet subdued to man, its presence refreshes him" (Thoreau,Collected Essays and Poems, p. 240). "Hope and the future for me," he adds, "are not in lawns and cultivated fields, not in towns and cities, but in the impervious and quaking swamps" (p. 241). Of course, Thoreau was hardly an actual wild man, a point he acknowledges in another talk, "Wild Apples," when he notes that " our wild apple is wild only like myself, perchance, who belong not to the aboriginal race here, but have strayed into the woods from the cultivated stock" (Thoreau, p. 452). As this comment suggests, Thoreau recognized that he came to the woods as a highly developed product of civilized society. So too his approach to the Walden environs should be regarded not as a kind of wilderness adventureWalden was hardly a wilderness, then as nowbut rather as an effort to locate and give voice to the wildness that subsists with and within the cultivated anThoreau, Henry David is the author of 'Walden and Civil Disobedience', published 2005 under ISBN 9781593082086 and ISBN 1593082088.