Voices & Views A History of the Holocaust 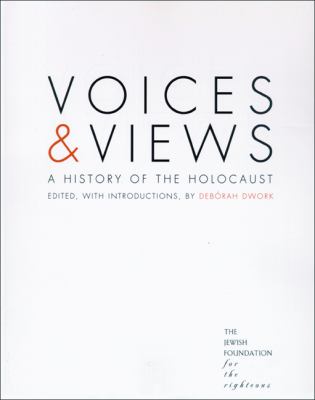 In Voices and Views Deborah Dwork has brought together many of the most important figures in Jewish scholarship to produce a definitive collection of essays, documents, and images on the Holocaust. Beginning with a brief survey of historical anti-Judaism and anti-Semitism, the volume includes chapters such as "Jews, Gentiles, and Germans," "World War I and the Interwar Period," "The National Socialist Regime," "Refugee Policy," one chapter each on gentile and Jewish life under German occupation, "The Machinery of Death and the Murderers," one chapter each on rescue and rescuers, and a final chapter. "After the Holocaust." Each of these chapters offers an unparalleled selection of powerful images (many of them rare), primary documentsRichard Wagner on Judaism in music, for example, and "The Ensatzgruppen Reports: Selections from the Dispatches of the Nazi Death Squads' Campaign against the Jews in Occupied Territories of the Soviet Union July 1941January 1943"and writings by major figures such as Primo Levi, David Wyman, Saul Friedlander, and others. Sponsored by the Jewish Foundation for the Righteous, Voices and Views is an educational resource for teaching about the Holocaust that also speaks to the cataclysm's deeper questions: What can we teach the young about the Holocaust that can strengthen their morale, morals, and wisdom, and thus provide tools to live in a scarred universe? What sparks of light can be sifted from the ashes of the crematoria? While not avoiding the grim horrors of the Holocaust, the editors of this volume felt it was important to focus on rescuersthe Righteousto a greater degree than was their proportional impact during the war because of their moral significance. Voices and Views is thus a comprehensive reference work but also a volume with an inspirational purpose. Contributors include William Nicholls, Robert Wistrich, Eugen Weber, Klaus Fischer, Ezra Mendelsohn, Tracy Koon, Wolfgang Sofsky, William Carr, Marion Kaplan, Henry Feingold, David Wyman, Bernard Wasserstein, Michael Marrus, Margaret Collins Weitz, Leni Yahil, Isaiah Trunk, Yisrael Gutman, Christopher Browning, Raul Hilberg, Saul Friedlander, Philip Hallie, Yehuda Bauer, Nechama Tec, Miep Gies, Carol Rittner, Sondra Myers, Mark Wyman, and Primo Levi. Distributed for the Jewish Foundation for the RighteousDwork, Deborah is the author of 'Voices & Views A History of the Holocaust', published 2005 under ISBN 9780970060211 and ISBN 0970060211.