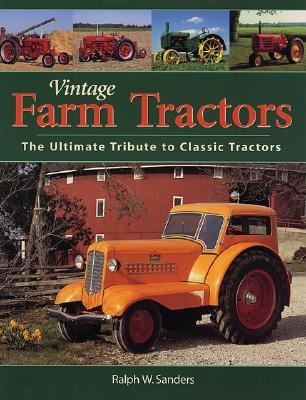 Ralph W. Sanders was born and raised on a farm near Stonington, Illinois. He grew up working some of the machines tractor collectors now seek, including a Farmall F-12, Caterpillar R2, and later, a Ford-Ferguson 2N, Farmall C, and Caterpillar D2. The harvest of winter wheat in the summer and soybeans in the fall brought from the shed the 1929 Stockton, California-built Holt combine on which he and his brothers John Jr. ("Jack") and Jim took turns as "header tender." Summers also gave the Sanders boys a chance to bale hay on their grandfather Wetzel's Case wire-tie (non-automatic) pickup baler. Rural electrification had added lights to the Old Stonington one-room country schoolhouse just before Ralph began first grade there in 1939. By the time he had completed the eighth grade, World War II was over and the Atomic Age had dawned. It was during this time that he was captivated by photography as he watched developing prints magically appear in trays spread out on the table in the darkened farmhouse's kitchen. To feed his $1.98 Kodak Baby Brownie Special camera, he stood in line for his one roll of Kodak Verichrome 127 film the day the local camera store got its monthly allotment of the precious war-rationed film. By the time Ralph graduated from Stonington Community High School in 1951, the Korean War was underway. After studying agriculture at the University of Illinois for three years he was drafted into the U.S. Army and spent most of his two years of duty in Germany. With the help of the G.I. Bill, Ralph completed a bachelors degree in journalism at the University of Illinois, and earned his "wings"-his private pilots license. His journalism career started with news writing and broadcasting duties at radio stations WCRA in Effingham, Illinois, and then WDZ in Decatur, Illinois. That experience led to daily newspaper reporting with the Decatur Herald and Review, farm reporting as Illinois field editor of Prairie Farmer magazine, and in 1968, more farm coverage as an associate editor at Successful Farming magazine in Des Moines, Iowa. In 1974, Ralph followed his passion for photography and became a full-time freelance photographer. He then dusted off his private pilots license and, by 1978, was flying Sanders Photographics' Piper Cherokee Archer II over the eastern half of the United States on assignments for a growing number of agricultural accounts. The farm crisis of the 1980s effectively shut down "Sanders Air" and, in 1986, he sold the airplane and reluctantly joined the other "road plodders" on the highways. Over the years, Ralph's agricultural photographic work has included assignments for Successful Farming, Deere and Company, Massey-Ferguson, Kinze Mfg., Vermeer Mfg., DuPont Ag, Monsanto Ag, and many others. Sanders Photographics, Inc. in Urbandale, Iowa, has grown to four employees including his wife, Joanne, and two of their sons, Scott and Richard. Ralph and Joanne have lived in West Des Moines for twenty-eight years. They have seven grown children and seven grandchildren. Working with John Harvey, then ag division external affairs manager at DuPont, Ralph photographed the first DuPont Classic Farm Tractors calendar in 1990. Since then Ralph has photographed all of the Classic Farm Tractors calendars, covering more than one hundred tractors from all over the United States and Canada, and traveled nearly 100,000 miles in the process. Those lovingly restored tractors, originally photographed for that calendar, form the nucleus of this book. Conversations with their owners put Ralph on track to preserve some of our country's rural heritage-that of the American farm tractor.Sanders, Ralph W. is the author of 'Vintage Farm Tractors The Ultimate Tribute to Classic Tractors', published 2004 under ISBN 9780896586451 and ISBN 0896586456.