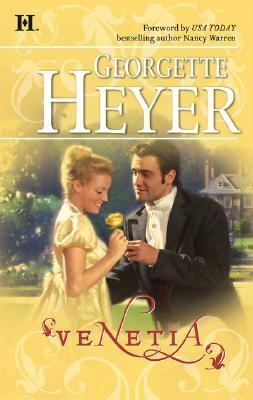 "A FOX GOT IN AMONGST the hens last night, and ravished our best layer," remarked Miss Lanyon. "A great-grandmother, too! You'd think he would be ashamed!" Receiving no answer, she continued, in an altered voice: "Indeed, you would! It is a great deal too bad. What is to be done?" His attention caught, her companion raised his eyes from the book which lay open beside him on the table and directed them upon her in a look of aloof enquiry. "What's that? Did you say something to me, Venetia?" "Yes, love," replied his sister cheerfully, "but it wasn't of the least consequence, and in any event I answered for you. You would be astonished, I daresay, if you knew what interesting conversations I enjoy with myself." "I was reading." "So you were--and have let your coffee grow cold, besides abandoning that slice of bread-and-butter. Do eat it up! I'm persuaded I ought not to permit you to read at table." "Oh, thebreakfast-table!" he said disparagingly. "Try if you can stop me!" "I can't, of course. What is it?" she returned, glancing at the volume. "Ah, Greek! Some improving tale, I don't doubt." "TheMedea," he said repressively. "Porson's edition, which Mr. Appersett lent to me." "Iknow! She was the delightful creature who cut up her brother, and cast the pieces in her papa's way, wasn't she? I daresay perfectly amiable when one came to know her." He hunched an impatient shoulder, and replied contemptuously: "You don't understand, and it's a waste of time to try to make you." Her eyes twinkled at him. "But I promise you I do! Yes, and sympathize with her, besides wishing I had her resolution! Though I think I should rather have buriedyourremains tidily in the garden, my dear!" This sally drew a grin from him, but he merely said, before turning back to his book, that to order her to do so would certainly have been all the heed their parents would have paid. Inured to his habits, his sister made no further attempt to engage his attention. The slice of bread-and-butter, which was all the food he would accept that morning, lay half-eaten on his plate, but to expostulate would be a waste of time, and to venture on an enquiry about the state of his health would serve only to set up his hackles. He was a thin boy, rather undersized, by no means ill-looking, but with a countenance sharpened and lined beyond his years. A stranger would have found these hard to compute, his body's immaturity being oddly belied by his face and his manners. In point of fact he had not long entered on his seventeenth year, but physical suffering had dug the lines in his face, and association with none but his seniors, coupled with an intellect at once scholarly and powerful, had made him precocious. A disease of the hip-joint had kept him away from Eton, where his brother Conway, his senior by six years, had been educated, and this (or, as his sister sometimes thought, the various treatments to which he had been subjected) had resulted in a shortening of one leg. When he walked it was with a pronounced and ugly limp; and although the disease was said to have been arrested the joint still pained him in inclement weather, or when he had over-exerted himself. Such sports as his brother delighted in were denied him, but he was a gallant rider, and a fair shot, and only he knew, and Venetia guessed, how bitterly he loathed his infirmity. A boyhood of enforced physical inertia had strengthened a natural turn for scholarship. By the time he was fourteen if he had not outstripped his tutor in learning he had done so in understanding; and it was recognized by that worthy man that more advanced coaching than he felt himself able to supply was needed. Fortunately, the means of obtaining it were at hand. The incumbent of the parish was a notable scholar, and had for long observed with a sort of wistful delight Aubrey Lanyon's progress. He offered to prepare the boy for Cambridge;Heyer, Georgette is the author of 'Venetia', published 2006 under ISBN 9780373771660 and ISBN 0373771665.