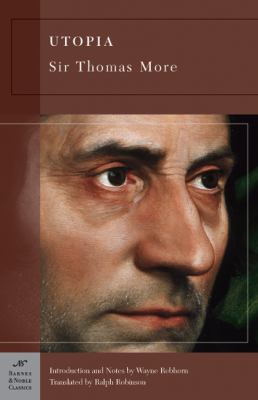 From Wayne A. Rebhorn's Introduction toUtopia Omnium horarum homo: a "man for all hours." That's what Desiderius Erasmus calls his friend Thomas More. The phrase appears in the letter that serves as the preface for Erasmus's masterpiece,The Praise of Folly, and is also the source of Robert Bolt's title for his play and movie about More,A Man for All Seasons. Bolt's title transforms More into a secular saint, a model of individual integrity, a man "for all seasons"that is, for all of history. Indeed, the French translated the title of Bolt's film asUn Homme pour l'eternite, making More into "A Man for Eternity." This is not, however, what Erasmus meant by the words he penned in 1511, long before More achieved martyrdom, suffering death rather than accept Henry VIII as the head of the Church. Erasmus is actually praising More for being able "to play the man for all hours with everyone." More is an ideal figure, in other words, because he is adaptable, able to get along with all sorts of people in all sorts of situations and as circumstances change from hour to hour, what Erasmus means by "folly"that is, a supreme versatility in living life in this world. The historical More certainly possessed such versatility, so that when Erasmus decided to praise "Folly," orMoriain Greek, it is not surprising that the name of More,Morusin Latin, should have popped into his head not just as an appropriate dedicatee, but as someone who epitomized all the best meanings he attributed to folly in his work. Erasmus's compliment to More makes More into aplayer, someone who knows how "to playor actthe man" (hominem agere) in every situation. Indeed, in his biography of More, almost the very first thing his son-in-law William Roper does is to praise More's success at improvisational acting when he was still a young page in the household of the learned John Cardinal Morton: "Though he was young of years, yet would he at Christmastide suddenly sometimes step in among the players, and never studying for the matter, make a part of his own there presently among them, which made the lookers-on more sport than all the players beside." Even a cursory review of More's life and works reveals his ability to play many incredibly varied roles, some of which were even opposed to one another. For example, More was a faithful husband and devoted father, but also an ascetic who seriously considered entering a monastery. He was a learned humanist scholar and translator of the classics, but also a propagandist for the Tudor regime and a mud-slinging critic of Luther. More won cases as a clever lawyer and fought to preserve his economic, social, and political status, but he was also a deeply religious devotional writer who looked down on attachments to this world. An impartial and fair-minded negotiator, civil servant, and magistrate, he became an implacable opponent and persecutor of heretics; best known for his role as a lord chancellor who willingly implemented Henry's policies and paid his royal master almost servile deference, he was also, at the end, a defender of his own conscience against monarchical tyranny. Finally, More stands on the world stage as an unfettered genius capable of imagining brave new worlds in his greatest literary and philosophical achievement, even though he was also an uncompromising defender of received traditions and of an ancient, long-established institution that was deeply opposed to change. Luther once said of Erasmus, complaining of the Dutch humanist's mutability and contradictoriness, &More, Thomas is the author of 'Utopia / Utopia ', published 2005 under ISBN 9781593082444 and ISBN 1593082444.