Toxic Parents Overcoming Their Hurtful Legacy and Reclaiming Your Life 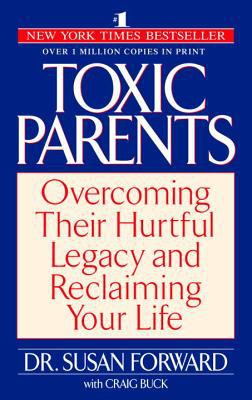 Godlike Parents The Myth of the Perfect Parent The ancient Greeks had a problem. The gods looked down from their ethereal playground atop Mount Olympus and passed judgment on everything the Greeks were up to. And if the gods weren't pleased, they were swift to punish. They didn't have to be kind; they didn't have to be just; they didn't even have to be right. In fact, they could be downright irrational. At their whim, they could turn you into an echo or make you push a boulder uphill for all eternity. Needless to say, the unpredictability of these powerful gods sowed quite a bit of fear and confusion among their mortal followers. Not unlike many toxic parent-child relationships. An unpredictable parent is a fearsome god in the eyes of a child. When we're very young, our godlike parents are everything to us. Without them, we would be unloved, unprotected, unhoused, and unfed, living in a constant state of terror, knowing we were unable to survive alone. They are our all-powerful providers. We need, they supply. With nothing and no one to judge them against, we assume them to be perfect parents. As our world broadens beyond our crib, we develop a need to maintain this image of perfection as a defense against the great unknowns we increasingly encounter. As long as we believe our parents are perfect, we feel protected. In our second and third years of life, we begin to assert our independence. We resist toilet training and revel in our "terrible twos." We embrace the word no because it allows us to exercise some control over our lives, whereas yes is simply an acquiescence. We struggle to develop a unique identity, establish our own will. The process of separating from parents reaches its peak during puberty and adolescence, when we actively confront parental values, tastes, and authority. In a reasonably stable family, parents are able to withstand much of the anxiety that these changes create. For the most part, they will attempt to tolerate, if not exactly encourage, their child's emerging independence. The expression "it's just a phase" becomes a standard assurance for understanding parents, who remember their own teenage years and appreciate rebellion as a normal stage of emotional development. Toxic parents aren't so understanding. From toilet training through adolescence, they tend to see rebellion or even individual differences as a personal attack. They defend themselves by reinforcing their child's dependence and helplessness. Instead of promoting healthy development, they unconsciously undermine it, often with the belief that they are acting in their child's best interest. They may use phrases such as "it builds character" or "she needs to learn right from wrong," but their arsenals of negativity really harm their child's self-esteem, sabotaging any budding independence. No matter how much these parents believe they're right, such assaults are confusing to a child, bewildering in their animosity, their vehemence, and their suddenness. Our culture and our religions are almost unanimous in upholding the omnipotence of parental authority. It's acceptable to express anger at our husbands, wives, lovers, siblings, bosses, and friends, but it's almost taboo to assertively confront our parents. How often have we heard the phrases "don't talk back to your mother" or "don't you dare shout at your father"? The Judeo-Christian tradition enshrines the taboo in our collective unconscious by pronouncing "God the Father" and directing us to "honor thy father and mother." The idea finds voices in our schools, our churches, our government ("a return to family values"), even in our corporations. According to the conventional wisdom, our parents are empowered to control us simply because they gave us life. The child is at the mercy of his godlike parents and, like the ancient GreeForward, Susan is the author of 'Toxic Parents Overcoming Their Hurtful Legacy and Reclaiming Your Life', published 2002 under ISBN 9780553381405 and ISBN 0553381407.