The Saga of Mathematics: A Brief History 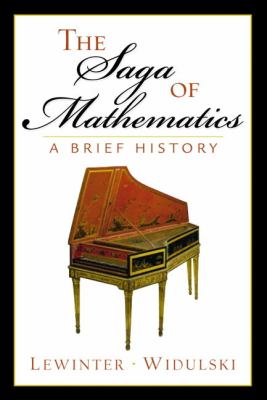 This book was written to accomplish several things. Firstly, it is an inexpensive text for courses in the history of math. Secondly, it is a vehicle of the authors' passion (hopefully contagious) for mathematics. Thirdly, the book brings out the relation of mathematics to music, art, science, technology, and philosophy--in short, this is an interdisciplinary adventure for readers of all ages. Finally, it is suitable for a "general education" course in mathematics. Teaching mathematics to nonmajors poses a difficult problem across the country. This book is, we believe, a good solution. It makes mathematics relevant to many other disciplines and emphasizes the cleverness and beauty inherent in this subject. It is our hope that the reader will dine on the banquet of ideas in this text with gusto. The material is very accessible and, we think, well motivated. It features geometry, number theory, algebra, probability, graph theory, and ancient and modern counting systems, including binary arithmetic for the computer age. The first author has taught "History of Mathematics" for a decade and, after wandering from text to text, decided to write one that addresses the needs of the reluctant, ill-prepared (perhaps even math-phobic?) college student. With a light peppering of good-natured humor, the book touches on science, navigation, commerce, the calendar, music, art, philosophy, and, of course, history. In short, it has something for everyone. There are many worked out examples in the text. The plentiful collection of homework exercises range from easy to hard, giving the instructor some flexibility in the level of difficulty of the course. Each chapter ends with a list of suggested reading. Chapter 1, "Oh So Mysterious Egyptian Mathematics!," begins with primitive counting by grouping. Egyptian arithmetic, geometry, and algebra are then presented in a way that will interest history and anthropology majors. The concept of unit-based measurement is introduced. The births of astronomy, religion, and the calendar are linked. In Chapter 2, "Mesopotamia Here We Come," the Babylonian position system and its similarity to (and differences from) the present day number system are presented in a historical context. Their algorithms for division and for calculating square roots are included. Babylon cosmology is shown to have influenced the European world-view up to the seventeenth century. Chapter 3, "Those Incredible Greeks!," is the first chapter to feature mathematicians, their lives, and their contributions. Starting with Thales, the father of "proof," the text continues with the Pythagorean contributions to number theory (perfect, deficient, and abundant numbers, for example), tiling of the plane, and Greek "music theory" including several concrete mathematical arguments such as a proof that the angle sum of a triangle is 180 degrees and a proof of the irrationality of (the square root of 2). The chapter closes with the amazing feat of Hippocrates of Chios--the squaring of the lune. In Chapter 4, "Greeks Bearing Gifts," we investigate the relevance of mathematics to Greek philosophy, especially to the Plato versus Aristotle dispute on the nature of universals, or "forms." Euclid is one of the heroes of Hellenistic mathematics in Alexandria and his contributions to the logical foundation of geometry and to number theory are discussed at length. His proof of the infinitude of the primes and his algorithm for the GCD of two numbers are presented. The great Archimedes' many contributions come next, and the chapter closes with Ptolemy's seed of trigonometry and his map of the ancient world. Chapter 5 is entitled "Must All Good Things Come to an End?" The Classical world gives way to the rise of Christianity and Islam. We examine the contributions of the Islamic mathematicians and the development of Hindu-Arabic arithmetic--all in a historical perspective. In ChaptWilliam Widulski is the author of 'The Saga of Mathematics: A Brief History', published 2001 under ISBN 9780130340795 and ISBN 0130340790.