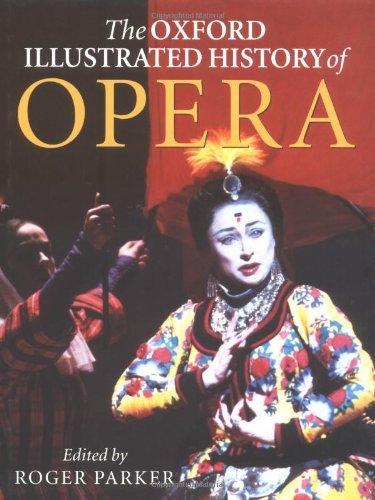 In its lavish amalgam of theatrical and musical resources, its flamboyant charm, its extravagant appeal to the heart and the mind, and its seemingly inexhaustible power to move and astonish us, opera is clearly the most spectacular of all the arts. Now, in this beautifully illustrated, oversized volume--boasting over 250 pictures, 30 in full color--eleven leading authorities chronicle the full sweep of this stunning musical genre, ranging from the earliest known works to such recent experimental efforts as Robert Wilson and Philip Glass's Einstein on the Beach. The contributors--including such noted opera critics as William Ashbrook, Paul Griffiths, and Barry Millington--provide superb coverage of all the major periods. We read of the remarkable success of opera in republican Venice, where by 1650 some fifty operas had been performed, including masterworks by Monteverdi, the giant of the era. We learn of opera seria--which within the world of eighteenth-century Italian opera was the summit of prestige--and opera buffa, most noted today for three major works by Mozart: Le Nozze di Figaro, Don Giovanni, and Cosi Fan Tutti. We explore the peak of opera's popularity in nineteenth-century France, Italy, and Germany, with astute commentary on such major composers as Berlioz, Bizet, Rossini, Donizetti, and especially Wagner and Verdi. And we examine the remarkably diverse works of our own century, from Strauss's Der Rosenkavalier and Alban Berg's Wozzeck to Benjamin Britten's Death in Venice and John Adams's Nixon in China. Throughout, the contributors illuminate how opera often reflects the cultural concerns of the age, how it is part of the social fabric, and in three fascinating sections on staging, singers, and the social climate, they give us a look behind the scenes as well as a feel for what opera was like in the past. We discover, for instance, that before the late nineteenth century, patrons were not expected to arrive on time, sit still, keep quiet, concentrate on the stage action, or stay to the end (Wagner put an end to this practice by darkening the theatre). Not least important are the numerous illustrations in the book, which highlight the richly visual nature of opera, the manner in which it communicates so vividly through staging and costume. Exhaustively researched and informatively captioned, these striking pictures offer an immediacy with the past that both enriches and complements the narrative. Nowhere does the rich panoply of opera history unfold more grandly than in this volume. Authoritative, vividly written, and exquisitely designed, it will be treasured by everyone who loves opera.The Oxford Illustrated History of Opera (Oxford Illustrated Histories), 1ST was published 1995 under ISBN 9780198162827 and ISBN 0198162820.