The News about the News: American Journalism in Peril 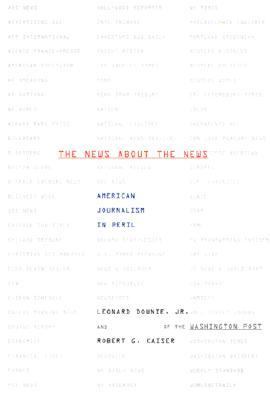 Chapter One News Matters The story is a legend now, but it really did happen. Early in the morning of June 17, 1972, inside the headquarters of the Democratic National Committee in Washington's Watergate office building, police arrested five men wearing business suits and rubber surgical gloves and carrying cameras and sophisticated bugging devices.The Washington Postassigned a longhaired newsroom roustabout named Carl Bernstein and one of the paper's newest reporters, Bob Woodward, to report the story. Over the next two years they unraveled a tangled conspiracy of political spying and dirty tricks, wiretaps, break-ins, secret funds and a criminal cover-upall orchestrated by President Richard Nixon's White House. For a long time thePostwas the only news organization to take Watergate seriously. The Washington establishment brushed the story off, and Nixon's allies put pressure on thePostto drop it. But after months of Woodward and Bernstein's revelatory stories, government investigators and then the Congress joined the pursuit. Impeachment proceedings began, and on August 9, 1974, Nixon became the first president of the United States ever to resign his office. Watergate became an example for the ages, a classic case when journalism made a difference. Good journalism does not often topple a president, but it frequently changes the lives of citizens, both grand and ordinary. When Robert Hopkins telephonedWashington Postcolumnist Courtland Milloy, he was sixty-five years old, a diabetic on kidney dialysis three times a week and the desperate father of three young children, ages four, five and six. Their mother had abandoned the family soon after the birth of the youngest child and shortly before Hopkins's illnesses had been discovered. When Milloy met the Hopkins family, they were squatters in an abandoned apartment complex in a run-down Washington neighborhood. The children charmed Milloy, as did Hopkins's determination to hold his family together, get his kids off to school and find them something to eat. They were surviving on $566 a month in social security benefits. "Robert Hopkins says he hopes I can help," Milloy wrote in thePost. "With his health deteriorating and his children's needs skyrocketing, he reluctantly places his case before the court of last resort." After Milloy's column appeared, Hopkins received $10,000 in donations from readers. A widow with a comfortable house invited Hopkins and his children to move in with her. Other readers offered to take the Hopkins children to restaurants and amusement parks, to mentor and tutor them, to buy them clothes. In a second column, Milloy described Hopkins opening letters containing checks and offers of help: "'Who are these people?" [Hopkins] asked, tears of amazement in his eyes. 'Are they real?'" Good journalism holds communities together in times of crisis, providing the information and the images that constitute shared experience. When disaster strikes, the news media give readers and viewers something to hold ontofacts, but also explanation and discussion that can help people deal with the unexpected. So on September 11, 2001, and for some time after, Americans remained glued to their televisions, turned in record numbers to online news sites and bought millions of extra copies of their newspapers to help absorb and cope with the horrors of a shocking terrorist attack on the United States. In the weeks that followed, good reporting allowed Americans to participate vicariously in the investigations of the terrorists and the government's planning for retaliation. Journalists could educate Americans about Islamic extremists, the history of Afghanistan, the difficulty of defending the United States against resourceful and suicidal terrorists and much more. Journalism defined the events of September 11 and thDownie, Leonard, Jr. is the author of 'The News about the News: American Journalism in Peril' with ISBN 9780375408748 and ISBN 0375408746.