The Last Flight of the Scarlet Macaw 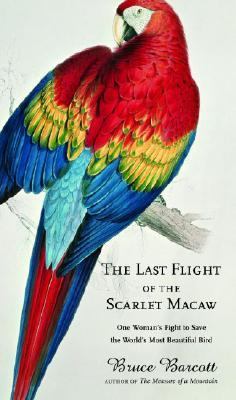 Chapter 1 I f you feel a need to escape the law, elude creditors, hide assets, or shed the skin of your humdrum life, you could do worse than run away to Belize. Belize is a tiny nation tucked between Guatemala, Mexico, and the Caribbean Sea. It's firmly attached to Central America but considers itself a Caribbean island, like a chicken that thinks it's a duck. For more than a hundred years Belize was known as British Honduras, one of the most remote outposts of the British Empire, which explains why it's the only Latin American nation to embrace English as its official language. It's difficult to overstate the smallness of the place. Imagine a country the size of Massachusetts with the population of Corpus Christi, Texas. Give it an army of seven hundred soldiers and a seat in the United Nations and you start to get an idea of Belize. Centuries ago more than one million Maya populated this part of Central America. Today fewer than three hundred thousand Belizeans spread themselves among the country's river towns and tin-shack villages. Two-thirds of the country is covered by jungle. Belize goes unnoticed by the rest of the world, and over the years the country has parlayed its obscurity into an attractive asset. For those shipwrecked on the shoals of life, Belize offers a new beginning. The country teems with adventurous refugees who've set up shop in the middle of the Central American jungle. British innkeepers, Mennonite farmers, Chinese shopkeepers, Lebanese entrepreneurs, American missionaries, Canadian aid workers, and Dutch scientists live peacefully alongside the nation's longer- established residents, the Garifuna artists, Maya cacao growers, Mestizo plantation managers, and Creole politicians who make up the majority of the country's population. Belize draws the eccentric, the madcap, and the downright mad. In this colorful human menagerie it takes some doing to stand out, but there is one woman who manages to delight, enrage, captivate, frustrate, and inspire her fellow Belizeans more than anyone else. She's the proprietor of the Belize Zoo. Her name is Sharon Matola. Sharon shares her office with a three-legged jaguar named Angel. When the screen door bangs, Angel limps up a cleated ramp that connects the jaguar habitat to the office, a plywood shack on stilts. When she sees Sharon, Angel rolls over and stretches like a dog wanting its belly scratched. Sharon will toss Angel a piece of chicken through the wire fence that separates them. The jaguar catches the meat in her jaws with a clop. Visitors to Sharon's office often ask to pet Angel, which Sharon discourages. "Never pet a jaguar," she once told me, "unless you're willing to feed her your hand." Sharon speaks fluent Russian and once worked as a lion tamer for a traveling Mexican circus. She sings to wild jaguars to soothe them. As a young woman she married a dentist and lived in a tidy house in Iowa City. When she grew restless she started hopping freight trains to Florida. She once smuggled a spider monkey across the Mexican border by swimming the Rio Grande with the animal balanced on her head. She's an expert in mycology, the study of fungi, and is considered one of the world's foremost authorities on both the scarlet macaw and the Baird's tapir, a three-toed ungulate with a ridiculous floppy snout. Most of that knowledge she picked up while walking through the Central American jungle carrying little more than a machete. Sharon is more at home in the jungle than most of us are in our mother's kitchen. An American by birth, she's spent the past quarter century in the raw tropical landscape of Central America. In the fall of 1982 she left the United States to work as an assistant on a nature documentary being filmed in BeBarcott, Bruce is the author of 'The Last Flight of the Scarlet Macaw', published 2008 under ISBN 9781400062935 and ISBN 1400062934.