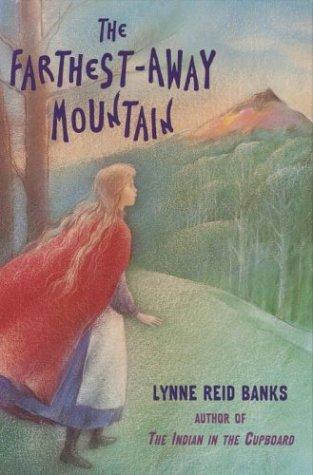 1 THE CALL One morning, very early, Dakin woke up sharply to find herself sitting up in bed. "Somebody called me!" she thought. "I heard a voice in my sleep!" She jumped up and ran to the open window in her long nightgown. Outside, the sun was just appearing beyond the farthest-away mountain, breathing orange fire onto the strange, patchwork snow and streaking the pale sky with morning cloud colors. It was still cold, and Dakin shivered as she called softly into the empty world: "Did somebody want me?" No one answered, and Dakin thought she must have dreamed it. But just as she was turning to jump back into bed again, she saw something that nearly made her fall out of the window. The mountain nodded. At least, that's what it looked like. As the sun almost burst over the top, the black head of the mountain seemed to dip, as if to say, "Yes, somebody wants you." Dakin stared and stared, forgetting the cold, until the sun was completely clear of the peak and stood out by itself, round and red and dazzling. Nothing else happened, but all the same, Dakin knew. It was time to start. Moving quickly and quietly, she put on her warmest dress with three red petticoats under it, her stout climbing boots that laced with colored lacings up past her ankles, and the white apron she always wore. She hadn't time to plait her hair, so she pushed it out of the way under her long white stocking cap. Then she tiptoed downstairs. It was difficult to be quiet because of the boots, which she should have left till later. Her mother called from her bedroom: "Dakin, is that you?" "Yes, Mother," said Dakin, wondering how she would explain her going-out clothes if her mother saw her. "Put on the water for the porridge, little one," called her mother sleepily. Dakin almost changed her mind about going that moment. She wanted to run into her parents' room and curl up under the big feather quilt, hugging her mother's feet as she used to when she was little. It would be so safe and happy to put the water on the big black stove for the porridge, and later to eat it with coffee and wheaty bread with Mother and Father and Triska, and feed the hens and do the washing and go on all day as if the farthest-away mountain had never called her. For a moment she paused on the stairs. Then she thought, "No. I must do what I've said I'll do." So she went on downstairs, and pumped the water very quickly, and put it on to heat. Then she hastily filled her knapsack with the things she thought she'd needa chunk of bread and another of cheese, a slab of her mother's toffee, a mug and a knife, a candle and some matches. Then she looked around. On the window ledge was a book of poems her father had brought back for her from the city, and she put that in. Then, as an afterthought, she lifted off the mantelpiece the little brass figure of a troll that her father had found years and years ago on the very edge of the pinewood. She held the little man in her hand and looked at his impish, bearded face under the pointed hat. "I shouldn't take you really," she whispered. "You're brass and you're heavy." But nonetheless she slipped him into her knapsack and felt him slide between the loaf and the book and lie at the bottom. And she didn't feel so lonely suddenly. Now she could definitely hear sounds of movement from above, and she knew that soon they'd be down. So she pulled her warm brown cloak down from the hook behind the back door and wrapped it around her; then she put all her weight on the heavy latch,Lynne Reid Banks is the author of 'The Farthest-Away Mountain', published 2003 under ISBN 9780385901178 and ISBN 0385901178.