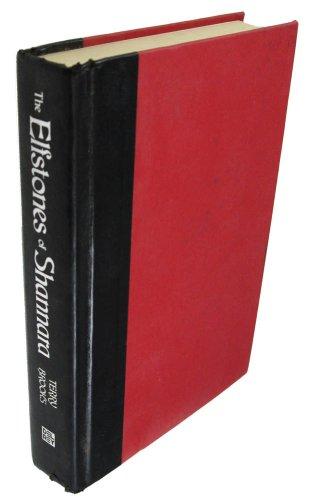 The night sky brightened faintly in the east with the approach of dawn as the Chosen entered the Gardens of Life. Without, the Elven city of Arborlon lay sleeping, its people still wrapped in the warmth and solitude of their beds. But for the Chosen, the day had already begun. Their trailing white robes billowing slightly with a rush of summer wind, they passed between the sentries of the Black Watch, who stood rigid and aloof as such sentries had stood for centuries gone before the arched, wrought-iron gateway inlaid with silver scroll and ivory chips. They passed quickly, and only their soft voices and the crunch of their sandaled feet on the gravel pathway disturbed the silence of the new day as they slipped into the pine-shadowed dark beyond. The Chosen were the caretakers of the Ellcrys, the strange and wondrous tree that stood at the center of the Gardens--the tree, as the legends told, that served as protector against a primordial evil that had very nearly destroyed the Elves centuries ago, an evil that had been shut away from the earth since before the dawn of the old race of Men. In all the time that had followed, there had been Chosen to care for the Ellcrys. Theirs was a tradition handed down through generations of Elves, a tradition of service that the Elves regarded as both a coveted honor and a solemn duty. Yet there was little evidence of solemnity in the procession that passed through the Gardens this morning. Two hundred and thirty days of the year of their service had gone by, and youthful spirits could no longer be easily subdued. The first sense of awe at the responsibility given them had long since passed, and the Chosen of the Elves were now just six young men on their way to perform a task they had performed each day since the time of their choosing, a task grown old and familiar--the greeting of the tree at the first touch of sunrise. Only Lauren, youngest of this year's Chosen, was silent. He lagged a bit behind the others as they walked, taking no part in their idle chatter. His red head was bent in concentration, and there was a deep frown on his face. So wrapped up in his thoughts was he that he was not aware when the noise ahead ceased, nor of the steps that fell back beside him, until a hand touched his arm. Then his troubled face jerked up abruptly to find Jase regarding him. "What's the matter, Lauren? Are you sick?" Jase asked. Because he was a few months older than the rest, Jase was the accepted leader of the Chosen. Lauren shook his head, but the frown did not leave his face entirely. "I'm all right." "Something is bothering you. You've been brooding all morning. Come to think of it, you were rather quiet last night, too." Jase's hand on his shoulder brought the younger Elf about to face him. "Come on, out with it. Nobody expects you to serve if youaO(TM)re not feeling well." Lauren hesitated, then sighed and nodded, "All right. It's the Ellcrys. Yesterday, at sunset, just before we left her, I thought I saw some spotting on her leaves. It looked like wilt." "Wilt? Are you sure? Nothing like that ever happens to the Ellcrys--at least that's what wea've always been told," Jase said doubtfully. "I could have been mistaken," Lauren admitted. "It was getting dark. I told myself then that it was probably just the way the shadows lay on the leaves. But the more I try to remember how it looked, the more I think it really was wilt." There was a disconcerted muttering from the others, and one of them spoke. "This is Amberle's fault. I said before that something bad would come from having a girl picked as a Chosen." "There were other girls among the Chosen, and nothing happened because of it,&qTerry Brooks is the author of 'The Elfstones of Shannara: (#2) (The Sword of Shannara)', published 1982 under ISBN 9780345302533 and ISBN 0345302532.