The 85 Ways to Tie a Tie: The Science and Aesthetics of Tie Knots 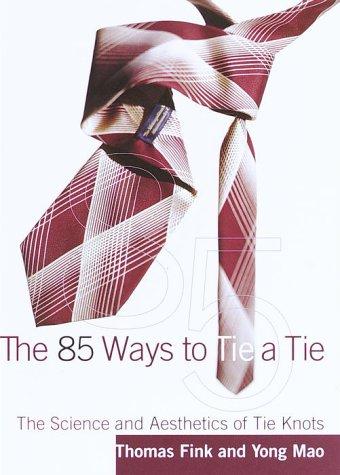 A Brief History of Tie Knots If we, the Brits, cannot claim to have invented the modern tie, no other nation can either. We do not have to trace ... its origins from the satin or velvet ribbon which held in place the lace jabot, to the loose neckcloth named after the battle of Steenkerk (3 August 1692), to Lord Guildford's lawn, to Beau Brummell's cravats, to Comte d'Orsay's pale-blue satin, to the sober black of Mr. Casaubon and all the Victorian gentry. The cravat, of course, disappeared with the frock and morning tail coat. The tie, as we know, came to stay with the lounge suit. Sir Hardy Amies The Englishman's Suit Antiquitie Evidence of the earliest known knotted neckcloth lies in the tomb of China's first emperor, Qin Shih-huang-di (259-221 bc). In an elaborate underground mausoleum, an army of 7,500 sculptured terracotta soldiers sports knotted neckerchiefs. The discovery of the scarved army in 1974 was remarkable since not a single neckcloth could be found again in the subsequent numerous Chinese paintings and statues up to the seventeenth century, when European style began to be influential. It had long been believed that Roman soldiers were the first to wear neckcloths. The marble Column of Trajan, erected in Rome by Emperor Traianus in ad 113, portrays some 2,500 carved figures, many depicted with neckcloths. Among the ancient neckerchiefs are ties apparently knotted in bows and early versions of what would, seventeen centuries later, become the standard knot for long ties: the four-in-hand. The pseudonymous book The Art of Tying the Cravat (1828) explained that the ancients 'defended [the throat] from the cold by means of a woollen or silken cloth, called in Rome focalium, a term which is evidently derived from fauces (the throat)'. But the treatise goes on to assert that a Roman considered it undignified to cover his throat except 'by hand, or occasionally wrapping the toga around it'. Indeed, Horace relates that neckcloths were thought to connote effeminacy and poor health. Perhaps this helps explain why neckwear is rarely found on Roman civilians and is instead restricted to military contexts where men had to endure harsh weather. Apart from cases of necessity, ancient necks were largely undecorated, and this sobriety continued throughout the first 15 centuries ad. Then, without warning but in stages, the neck became the focus of sartorial attention. In England the plain shirt collar, tied together with string, grew into a small frill under Henry VIII, eventually forming a ruff. The ruffs grew bigger and more lavish, but were suddenly decapitated with their royal patron Charles I with the defeat of the Royalists in the English Civil War. Not until the resurrection of the monarchy in 1660 did knotted neckcloths appear. Croats in Cravats It is commonly believed that the cravat, the modern tie's direct ancestor, originated during the Thirty Years' War (1618-1648). In his campaign against the Habsburg empire, King Louis XIII of France enlisted a regiment of Croatian cavalry. These mercenaries wore knotted neckcloths, and the new style was soon adopted by the French soldiers fighting alongside them. The cravat, as it came to be known, was ornamental but practical. Unlike the ruff collars in use at the time, which had to be laundered, starched and pressed, the new cravats required little maintenance and allowed freedom of movement. The fashion was soon brought home to France, where it was adopted by dandies and members of the court. With the restoration of the English monarchy, Charles II returned to England to reclaim his throne after nine years in exile at the French court of Louis XIV. With him he brought the cravat which, within a decade, had become a familiar style in England and the American colonies. The Oxford English Dictionary maintains that 'cravat' was derived from Croat, but evidence suggests otherwise: the word wYong Mao is the author of 'The 85 Ways to Tie a Tie: The Science and Aesthetics of Tie Knots', published 2000 under ISBN 9780767906432 and ISBN 0767906438.