Tess of the D'urbervilles 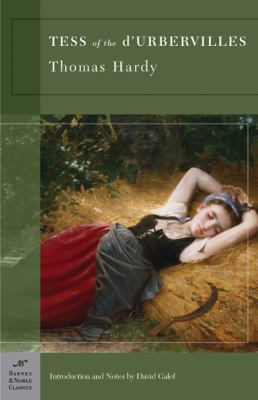 From David Galef's Introduction toTess of the D'Urbervilles Hardy's background suggests the dualities in the patterns of his fiction: the Victorian belief in social improvement versus a skepticism about the efficacy of reform; a love of the natural world versus the knowledge that nature is a mindless, impersonal system; and a nostalgia for previous eras despite the recognition that he himself probably would not have flourished back then. Born in 1840 and brought up in the rugged countryside of Dorset, which he turned into the Wessex of his fiction and poetry, Hardy became intimately acquainted with not just the local flora and fauna but seemingly every rise and bend in the region, or as Hardy mentions regarding Tess: "Every contour of the surrounding hills was as personal to her as that of her relatives' faces." But Hardy went beyond the little village of Stinson near his home. The school he attended from age nine to sixteen was in Dorchester, 5 miles away, a distance that he walked back and forth daily. Thus, when he opens a scene with "It was a hazy sunrise in August. The denser nocturnal vapours, attacked by the warm beams, were dividing and shrinking into isolated fleeces within hollows and coverts, where they waited till they should be dried away to nothing," or describes how the "ripe hue of the red and dun kine absorbed the evening sunlight," the pictorial naturalism speaks with the authority of someone who's done a great deal of traipsing through the southwest of England. In fact, Hardy also drew upon real towns and their citizens. Thus, Dorchester becomes Casterbridge, Marnhull is really Marlott, Sturminster-Newton turns into Stourcastle, Trantridge is suggestive of the real town of Pentridge, and so on. (See the Map of Wessex and the Index of Places in this edition.) Even during Hardy's lifetime, commentators compiled descriptions and photos of "Hardy country." Visitors still make pilgrimages to those towns and other landmarks, a surprising number of which have been preserved. Yet, living in the village of Higher Brockhampton near Stinson, Hardy grew up as many of the old rural ways were dying out: livelihoods, such as that of John Durbeyfield, described as a haggler or peddler; formerly independent businesses, such as inns, gradually taken over by franchises; and customs, such as May Day, a festival hearkening back to "when one-handed clocks sufficiently subdivided the day"; or simply the way John's wife, Joan, makes a mirror in the country way, by hanging a sheet on the outside of a window. Taking longer to fade are attitudes, such as the timeworn view that a woman with a sexual past is "ruined"--but not a man. Hardy only half regrets the vanishing of old ways. After all, the small rural towns of England in the mid-nineteenth century formed a world in which the family washing was never quite done, drinking was the sole pastime for many, and the death of a horse meant the loss of a livelihood. When Tess is down on her luck, she hires herself out first as a dairymaid, then as a reed-puller, and finally as a digger for swedes, or rutabagas. These jobs involve hard manual labor, as well as cooperation among workers. Hardy describes the tasks in the kind of detail that a novelist uses when the readership may be only half acquainted with its rural past: singing at cows to coax a greater yield of milk, or how to draw straw from corn stalks. If Hardy is able to place us in a bygone world, in fact he had the same transporting effect on his contemporary readers; most were far removed from rural life. At the same time, the rigor and plod of agricultural work forms a comment on the condition of the rural poor. As with Dickens's novels, Hardy's writings--iHardy, Thomas is the author of 'Tess of the D'urbervilles ', published 2005 under ISBN 9781593082284 and ISBN 1593082282.