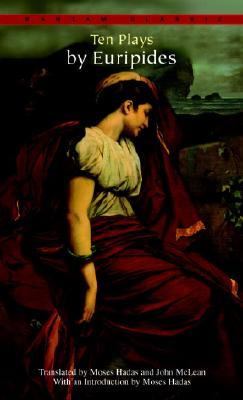 ALCESTIS CHARACTERS Apollo Death Chorus, elders of Pherae Handmaid Alcestis, wife of Admetus Admetus, King of Pherae Eumelus, son of Admetus and Alcestis Heracles Pheres, father of Admetus Butler Guards, attendants, mourners The scene represents the palace of Admetus at Pherae. Alcestis was acted in 438 b.c. [Enter Apollo, gorgeously dressed, with bow and quiver.] APOLLO. House of Admetus, in which I condescended to put up with a slave's table, I a god! Zeus was the cause: he killed my son Asclepius by hurling the lightning into his breast, and I in my anger slew the Cyclopes who fashion Zeus' fire; for this has the father constrained me to do bond service to a mortal man. I came to this land and tended cattle for my host, and I preserved his house to this day. In the son of Pheres I found a pious man, as I myself am pious, and I rescued him from death by tricking the Fates. These deities agreed that Admetus could escape Hades for the present by offering in exchange another body to the spirits below. He canvassed and solicited all his friends, his aged father and the mother who bore him, but he found no one except his wife willing for his sake to die and to forgo the light of day. His wife is now moving about the house supported in his arms and is gasping her last, for upon this day it is fated for her to die and quit this life. I am leaving the friendly shelter of these halls lest the pollution of death come upon me within doors. Already I perceive Death hard by, the priest of the dead who is ready to lead her down to the house of Hades. Punctually does he arrive; he has been watching for this day upon which she must die. [Enter Death, in a fearful and gloomy dress, with a bare sword.] DEATH. Ha! Ha! What are you up to outside the palace, why are you prowling about here, Phoebus? Are you at your tricks again? Appropriating the dues of the powers below and ending our perquisites? Was it not enough for you to prevent the death of Admetus by beguiling the Fates with a sly trick? Now you have armed your hand with a bow to keep guard also over this woman, this daughter of Pelias, who saved her husband by undertaking to die for him herself. APOLLO. Never fear. Justice and fair arguments are on my side. DEATH. What need of a bow if justice is on your side? APOLLO. It is my habit to wear it always. DEATH. Yes, and to give illegal aid to this house. APOLLO. I am weighed down by the predicament of a man that is my friend. DEATH. Will you deprive me of this second body too? APOLLO. I did not take that other from you by force. DEATH. Why then is he upon the earth, and not below ground? APOLLO. Because he gave his wife as ransom, for whom you are now come. DEATH. Yes, and I shall drag her below, underneath the earth. APOLLO. Take her and go; I doubt if I can persuade you---- DEATH. To kill whom I must? Why, that is my office. APOLLO. Not so, but to cast death upon those that are ripe for it. DEATH. I understand your logic--and your zeal! APOLLO. Is there any way, then, that Alcestis may reach old age? DEATH. There is not. Consider that I too take pleasure in my prerogatives. APOLLO. You would not be getting more than a single life. DEATH. When the young die I gain the greater prize. APOLLO. But if she die old she will be buried magnificently. DEATH. Phoebus! You lay down your law in favor of the rich. APOLLO. How do you mean? You a sophist too? Who would have thought it? DEATH. Those who could, would buy the privilege of dying old. APOLLO. Then you will not grant me this favor? DEATH. No. You know my ways. APOLLO. Yes, hateful to men and loathed by the gods. DEATH. You cannot have everything which is not your due. APOLLO. Yet will you forbear, exceedingly cruel though you are. A man will come to the house of Pheres, sent by Eurystheus to fetch a team of horHadas, Moses is the author of 'Ten Plays by Euripides', published 1984 under ISBN 9780553213638 and ISBN 0553213636.