Teddy Roosevelt and the Treasure of Ursa Major 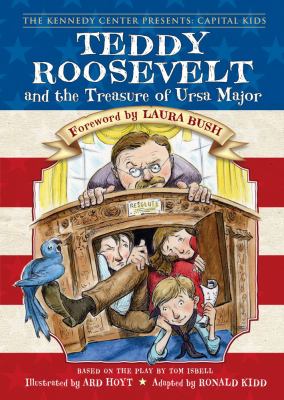 Chapter 1 The Haunted House Find the treasure, Archie," said the ghost.It appeared out of nowhere, a dim shape with gleaming eyes and a voice like sandpaper."B-but I'm just a kid," I said."Find the treasure before the others," said the ghost. "Find the treasure. Find the treasure. Find the treasure...."The voice faded out, and the shape melted away.My name is Archie Roosevelt. I'm eleven years old. I live with my father, mother, five brothers and sisters, a rabbit, a pony, a macaw, and a ghost.I never knew my house was haunted. But then, there were a lot of things I didn't know about it. Once, soldiers set it on fire and burned it to the ground. It has a desk made from an abandoned sailing ship. And according to legend, it's filled with secret passageways.Oh, there's one other thing I learned about it. They say that somewhere, among the rooms or inside the walls, there's a hidden treasure.You've probably heard of my house. You may have even been there. It's the White House. My father is Theodore Roosevelt, president of the United States.I found out about the treasure, the ghost, and all the rest one dark, stormy night. The night started normally enough -- well, normally for my family.I came running into the library, holding a cage containing my latest pet. "Hey, Pop, look what I caught. It's a badger!"My father was putting on his tie. Leaning down, he squinted at the cage. "That's not a badger. It's a mouth with a leg at each corner."My fifteen-year-old brother, Kermit, clomped by on stilts. "He didn't catch that badger. We both did."Ethel twirled around, dancing to music that only she heard. "I don't care who caught it. I think it's disgusting." Ethel was thirteen and believed she was smarter than anyone in the room. She was, if you only counted her and the badger.My father glanced in the mirror and straightened his tie. He has a proud chin, a bristling mustache, and little glasses that he balances on his nose. Some people say he's short and stocky, but to me he's ten feet tall.He turned to his valet, James Amos, who was stand-ing by as usual, perfectly dressed and in control. "James, did you see Mrs. Roosevelt off to her carriage?""Yes, sir. Right on time."I guess my mother needed a rest. She had all the duties of the First Lady, and in her spare time she raised six children. The two oldest, Alice and Teddy Junior, had already moved out. Earlier that day she had taken the youngest, Quentin, to visit my aunt. That left Kermit, Ethel, and me."Did the Russian ambassador arrive yet?" my father asked."Due any minute," said James."Pop," said Kermit, wobbling on his stilts, "are the Russians and Japanese still fighting?""Yes, but only until I get them in a room together. Then we'll iron this thing out."I decided it was time to talk about important things."Can we get a rabbit?" I asked.Ethel twirled past me. "You've already got a rabbit.""That's just it," I said. "The rabbit needs a friend.""Very well, we'll get another rabbit," said my father. "James, make a note. And I need a shave."He went to his desk and picked up a sheaf of documents in one hand and a half dozen newspapers in the other. My father likes to do several things at once. He says it's his way of giving the American people their money's worth.Settling into a chair, he opened one of the newspapers and began to read. As James lathered him up, a woman entered the room carrying a bag. Her gray hair was tied up in a bun, and she seemed nervous.My father looked up from the paper. "Ah, you must be the new governess. Mrs. Gruffit, is it?""Duffit. Mrs. Duffit, sir."He motioned to James. "This is my friend, James Amos. They say I'm in charge, but he runs the place."James nodded. "As smoothly as possible, all things considered. Welcome."I thought Mrs. Duffit might like to meet my badger, so I picked up the cage and showed it to her. For somKidd, Ronald is the author of 'Teddy Roosevelt and the Treasure of Ursa Major ', published 2008 under ISBN 9781416948575 and ISBN 1416948570.