Take on the Street How to Fight for Your Financial Future 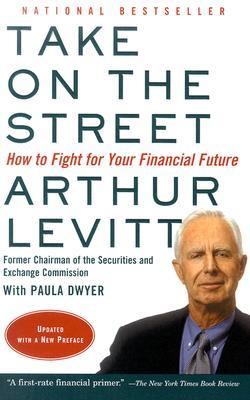 Chapter One How to Sleep as Well as Your Broker If they have it, sell it. If they don't, buy it. That was the whispered joke on Wall Street in 1963 when I joined the brokerage firm of Carter, Berlind & Weill. It was only half in jest. It betrayed the callous attitude many brokers had toward their clients. Brokers are supposed to advise you on which securities to buy and sell, depending on your financial resources and your investment objectives. They offer garden-variety stocks, bonds, and mutual funds, or such exotic instruments as convertible debentures and single-stock futures, to help you shape a portfolio that fits your needs. Brokers may seem like clever financial experts, but they are first and foremost salespeople. Many brokers are paid a commission, or a service fee, on every transaction in accounts they manage. They want you to buy stocks you don't own and sell the ones you do, because that's how they make money for themselves and their firms. They earn commissions even when you lose money. Commissions can take many forms. On a stock trade, the commission is a percentage of the total value of the shares. For a mutual fund there are up-front commissions, or sales loads, which are paid when you make an investment. There also may be back-end commissions, or deferred loads, which are paid when you take your money out. On bonds, brokers don't charge commissions. Instead, they make their money off the "spread," or the difference between what the firm paid to buy the bond and the price at which the firm sells the bond to you. Warren Buffett, the chairman and CEO of Berkshire Hathaway Inc. and one of the smartest investors I've ever met, knows all about broker conflicts. He likes to point out that any broker who recommended buying and holding Berkshire Hathaway stock from 1965 to now would have made his clients fabulously wealthy. A single share of Berkshire Hathaway purchased for $12 in 1965 would be worth $71,000 as of April 2002. But any broker who did so would have starved to death. While working in the early 1950s for his father's brokerage firm in Omaha, Neb., Buffett says he learned that "the broker is not your friend. He's more like a doctor who charges patients on how often they change medicines. And he gets paid far more for the stuff the house is promoting than the stuff that will make you better." I couldn't agree more. In sixteen years as a Wall Street broker, I felt the pressures; I saw the abuses. "Levitt, is that all you can do?" Those stinging words rang in my ears at the end of many a week as I struggled to join the ranks of successful Wall Street brokers at Carter, Berlind & Weill. Eleven of us worked out of an 800-square-foot office on 60 Broad Street, in the shadow of the New York Stock Exchange. I divided my time between buying and selling stock and scouting for companies that might want to go public. When I joined the firm, America was riding high. A postwar economic boom that began in the 1950s marched onward through most of the 1960s, encouraging companies to look to Wall Street to finance their expansion. The growth in jobs and overall prosperity produced much wealth, and people flocked to the stock market in search of easy money. It was a heady time, and I wanted to be a part of it. I was thirty-two, and though I had no Wall Street experience whatsoever, I started calling potential clients right away. The competition among the partners was intense. We shared one large office so we could keep a watchful eye on one another. Arthur Carter kept a green loose-leaf binder on his desk, and in it he recorded how much gross-the total amount of sales-each of us was responsible for each week. Every Monday morning I stared, terrified, at an empty calendar page, worrying how I was going to generate a respectable $5,000 in sales. When we reviewed the results on Friday, there would be much scolding and finger-pointing. IfLevitt, Arthur, Jr. is the author of 'Take on the Street How to Fight for Your Financial Future', published 2003 under ISBN 9780375714023 and ISBN 0375714022.