Superpower Myth The Use And Misuse of American Might 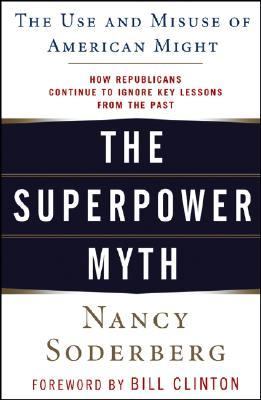 "A sensible, hard-headed, realistic alternative to the excesses of America's Iraq-era dealings with the world." -James Fallows, National Correspondent, The Atlantic MonthlyUsing vivid examples from her years in the White House and at the United Nations, Nancy Soderberg demonstrates why military force alone is not always effective, why allies and consensus-building are crucial, and how the current administration's faulty worldview has adversely affected policies toward Israel, Iraq, North Korea, Haiti, Africa, and al Qaeda. Powerful, provocative, and persuasive, this timely book demonstrates that the future of America's security depends on overcoming the superpower myth."One of the greatest strengths of Soderberg's book is her insider's account of many of the seminal events of the 1990s. Soderberg [gives us] a bird's-eye view of such critical issues as intervention in the Balkans and Haiti and U.S. efforts to combat al Qaeda and hunt down Osama bin Laden." -Charles A. Kupchan, The Washington Post Book World"A long, detailed insider's narrative of Clinton's foreign policy and an outsider's critique of Bush II's. Its value lies in its comprehensive coverage of American foreign policy." -Chalmers Johnson, The San Diego Union-Tribune"Does America Need a Foreign Policy?, by Henry Kissinger, The Choice, by Zbigniew Brzezinski, and The Superpower Myth, by Nancy Soderberg-all of these authors have firsthand experience in government, and it shows. The Superpower Myth, which doubles as a memoir of Soderberg's years in the Clinton administration, is a history told from inside meeting rooms, full of detail about how government bureaucracies actually function-and why sometimes they don't." -Jonathan D. Tepperman, The New York Times Book Review"Soderberg's argument that we must engage the world in concert with others speaks to an essential truth that we ignore at our own peril." -Ivo H. Daalder, coauthor of America Unbound"In The Superpower Myth Nancy Soderberg tackles the most important question the United States has faced since the end of the cold war: how, and to what end, do we use our military and economic supremacy? Her argument shows, among other things, how George W. Bush ignored the answers that the Clinton administration had begun to develop to this question. She provides a very useful memoir of the Clinton years and a compelling critique of the Bush administration." -John B. Judis, Senior Editor, The New Republic, and author of The Folly of EmpireSoderberg, Nancy E. is the author of 'Superpower Myth The Use And Misuse of American Might', published 2006 under ISBN 9780471789642 and ISBN 047178964X.