by Hitchcock, William I. 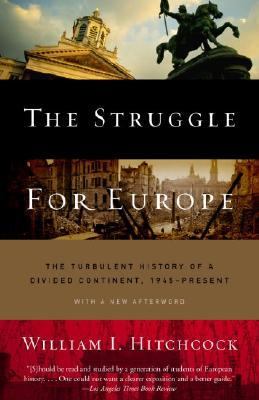 by Hitchcock, William I.

CHAPTER ONE GERMAN MIDNIGHT: THE DIVISION OF EUROPE, 1945 THE SPRING OF 1945 THE WAR IN EUROPE ended officially on 8 May 1945, a date that marks the death of the Third Reich and the birth of a new Europe. To those present, however, death seemed far more apparent than renewal. Hitler's armies had laid waste to the continent, murdered millions of people, waged ideological warfare upon the nations of Europe, and undertaken a horrific plan to exterminate Europe's Jews. There was nothing in the smoldering cinders to suggest that the future held anything but toil and pain. In the early years of the war, Germany had been spared the sort of destruction that the Wehrmacht so readily inflicted upon other countries. The chief victims then had been Poland, the Soviet Union, the Low Countries, France, Greece, and Yugoslavia. By 1943, however, Germans began to get a taste of the sort of suffering other Europeans knew well. In the last year and a half of the war, the Allied bombing offensive exacted a terrible toll against German cities, taking over a million lives. In July 1943, for example, bombers from Britain's Royal Air Force struck the industrial city of Hamburg, a major port on the North Sea. Incendiary bombs created a firestorm that ultimately engulfed eight square miles, killing 45,000 people. From November 1943 to March 1944, the RAF and US Army Air Force concentrated on Berlin, leaving the city in ruins but doing little to bring the government closer to surrender. In February 1945, just three months before the end of the war, Allied bombers launched a massive air assault on the city of Dresden. This ancient capital of Saxony, once called the Florence of the Elbe for its magnificent baroque architecture, possessed little heavy industry. Following an assault by some eight hundred RAF bombers and 311 American B-17s, the city was swallowed by fire, and over 50,000 people were incinerated. By the end of the war, most of Germany's major industrial cities in the Western part of the country were completely shattered. Ninety percent of the buildings in DYsseldorf, the major city of the industrial Ruhr Valley in Western Germany, were uninhabitable. Nearby Cologne lost 72 percent of its buildings, and 95 percent of its population had fled the city. Vengeance came not just from the skies. It also came at the hands of the occupying armies, particularly the Soviet Red Army. Recent scholarship now puts the Soviet death toll during the Second World War at the staggering figure of 25.5 million. In the era of total war, civilians died in greater numbers than combatants: the Soviet Union suffered 8.6 million military and 16.9 million civilian deaths.1 Most of the civilians died as a result of the exterminationist occupation policies imposed by the Germans in Ukraine and Belorussia, where the population was enslaved and starved to death. It should come as no surprise that after four years of ferocious war between Russia and Germany, the victorious Red Army was primed to return the favor in equal measure. Russian soldiers were urged on by their commanders to behave as brutally as possible. In January 1945, as his vast army was about to cross onto German soil, Soviet marshal Georgi Zhukov, victor of Stalingrad and soon to become the commander of the Soviet zone of occupation in Germany, exhorted his men to crush the Germans without pity: The great hour has tolled! The time has come to deal the enemy a last and decisive blow, and to fulfill the historical task set us by Comrade Stalin: to finish off the fascist animal in his lair and raise the banner of victory over Berlin! The time has come to reckon with the German fascist scoundrels. Great and burning is our hatred! We have not forgotten the pain and suffering done to our people by Hitler's cannibals. We have not forgotten our burnt-out cities and villages. We remember our brothers and sisters, our mothers and fathers, our wives and children tortured to deathHitchcock, William I. is the author of 'Struggle for Europe The Turbulent History of a Divided Continent 1945 to the Present', published 2004 under ISBN 9780385497992 and ISBN 0385497997.