Strike Up the Band: A New History of Musical Theatre 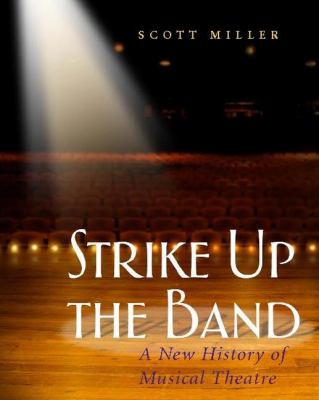 The way some histories portray the advent of musicals, you'd think the genre emerged fully formed with Show Boat. Yet in truth, it took root decades earlier. In Strike Up the Band Scott Miller tells the whole story of musicals, pulling back the curtain on the amazing innovation and adventurousness of the art form, revealing its political and social conscience, and chronicling its incredibly rapid evolution over the last century. Strike Up the Band focuses not only on what happened on stage but also on how it happened and why it matters to us today. It's a different kind of history that explores the famous and, especially, the not-so famous productions to discover the lineage that paved the way to contemporary musicals. Digging into 150 shows, Miller offers a forward-looking perspective on treasures from each era - such as Anything Goes, West Side Story, Hair, and Rent - while also looking at fascinating, genre-busting, and often short-lived productions, including Bat Boy, Rocky Horror Show, Promenade, and The Capeman, to see how even obscure or commercially unsuccessful musicals defined and advanced the form. Moving decade by decade, Miller offers insight and inside information about the artistic approaches various composers, lyricists, bookwriters, and directors have taken, how those approaches have changed over time, and what social and historical forces continue to shape musical theatre today. He provides a strong sense of what groups have historically controlled the industry and how other groups' hard work and vision continue to change the musical theatre landscape for the better. In fact, Strike Up the Band opens a new and vitally important discussion of the roles played in the musical's history by people of color, by gays and lesbians, by people with disabilities, and by women. It frames musical theatre as an important, irreplaceable piece of American history and demonstrates how it reflects the social and political conditions of its time - and how it changes them. On Broadway or off, Strike Up the Band is as adventuresome, detailed, and thoughtful in tracing the story behind the musical as it is in celebrating the form's diversity, vigor, innovation, and promise. Join Scott Miller not only in commemorating great moments on stage, but in gaining a powerful understanding of what the musical was, what it is today, and what it is becoming.Scott Miller is the author of 'Strike Up the Band: A New History of Musical Theatre', published 2006 under ISBN 9780325006420 and ISBN 0325006423.