Stigma: Notes on the Management of Spoiled Identity 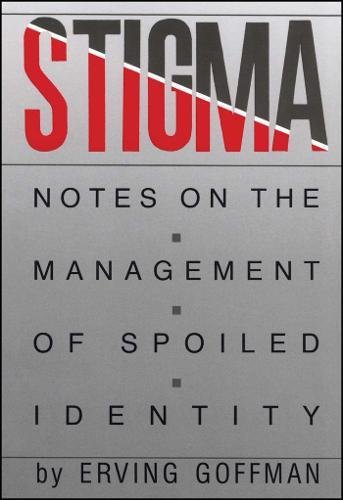 Chapter 1 STIGMA and SOCIAL IDENTITYThe Greeks, who were apparently strong on visual aids, originated the termstigmato refer to bodily signs designed to expose something unusual and bad about the moral status of the signifier. The signs were cut or burnt into the body and advertised that the bearer was a slave, a criminal, or a traitor -- a blemished person, ritually polluted, to be avoided, especially in public places. Later, in Christian times, two layers of metaphor were added to the term: the first referred to bodily signs of holy grace that took the form of eruptive blossoms on the skin; the second, a medical allusion to this religious allusion, referred to bodily signs of physical disorder. Today the term is widely used in something like the original literal sense, but is applied more to the disgrace itself than to the bodily evidence of it. Furthermore, shifts have occurred in the kinds of disgrace that arouse concern. Students, however, have made little effort to describe the structural preconditions of stigma, or even to provide a definition of the concept itself. It seems necessary, therefore, to try at the beginning to sketch in some very general assumptions and definitions.Preliminary ConceptionsSociety establishes the means of categorizing persons and the complement of attributes felt to be ordinary and natural for members of each of these categories. Social settings establish the categories of persons likely to be encountered there. The routines of social intercourse in established settings allow us to deal with anticipated others without special attention or thought. When a stranger comes into our presence, then, first appearances are likely to enable us to anticipate his category and attributes, his "social identity" -- to use a term that is better than "social status" because personal attributes such as "honesty" are involved, as well as structural ones, like "occupation."We lean on these anticipations that we have, transforming them into normative expectations, into righteously presented demands.Typically, we do not become aware that we have made these demands or aware of what they are until an active question arises as to whether or not they will be fulfilled. It is then that we are likely to realize that all along we had been making certain assumptions as to what the individual before us ought to be. Thus, the demands we make might better be called demands made "in effect," and the character we impute to the individual might better be seen as an imputation made in potential retrospect -- a characterization "in effect," avirtual social identity.The category and attributes he could in fact be proved to possess will be called hisactual social identity.While the stranger is present before us, evidence can arise of his possessing an attribute that makes him different from others in the category of persons available for him to be, and of a less desirable kind -- in the extreme, a person who is quite thoroughly bad, or dangerous, or weak. He is thus reduced in our minds from a whole and usual person to a tainted, discounted one. Such an attribute is a stigma, especially when its discrediting effect is very extensive; sometimes it is also called a failing, a shortcoming, a handicap. It constitutes a special discrepancy between virtual and actual social identity. Note that there are other types of discrepancy between virtual and actual social identity, for example the kind that causes us to reclassify an individual from one socially anticipated category to a different but equally well-anticipated one, and the kind that causes us to alter our estimation of the individual upward. Note, too, that not all undesirable attributes are at issue, but only those which are incongruous with our stereotype of what a given type of individual should be.The term stigma, then, will be used to refer to an attribute that is deeply discrediting, butErving Goffman is the author of 'Stigma: Notes on the Management of Spoiled Identity', published 1986 under ISBN 9780671622442 and ISBN 0671622447.