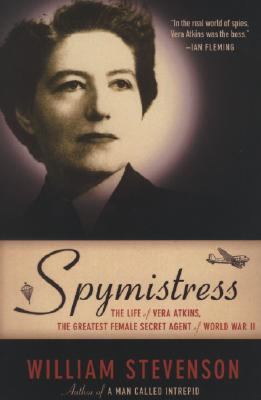 "She was beautiful. She was ruthless. With her lustrous black hair and smoky eyes, she was overwhelmingly seductive. Yet she had a steel trap for a mind and a will of iron. Her name was Vera Atkins, and to those who met her she was more British than the British. Yet in fact she was Romanian and Jewish, born Vera Maria Rosenberg in Bucharest. Her wealthy - and prescient - father, Max, sent her to England, where her brains and beauty set her apart, and in the early 1930s drew her to the attention of the legendary spymaster William Stephenson, the man who would later come to be known as "Intrepid."" "Like Stephenson, Vera saw the imminent dangers of the Nazi rise to power, and the need to gather as much intelligence about them as possible at a time when most governments were either ignoring or willfully appeasing Hitler." "Recruited by Stephenson when she was only twenty-three, Vera spent much of the 1930s running countless perilous espionage missions. When war was declared in 1939, Vera's fierce intellect, boundless energy, personal courage, and knowledge of several languages quickly propelled her to the leadership echelon of the highly secretive Special Operations Executive (SOE), a covert intelligence agency formed by, and reporting to, Winston Churchill. She recruited and trained several hundred agents, including dozens of women, whose objectives were to penetrate deep behind enemy lines, aid local resistance fighters, destroy enemy targets, help Allied pilots evade capture, and radio vital information back to London." "The stirring exploits and the exemplary courage of the SOE agents and the French Resistance fighters who in the words of General Dwight D. Eisenhower together "shortened the war by many months" - are justly celebrated. But the central role of Vera Atkins has until now been cloaked in silence. When Colonel Maurice Buckmaster, who worked beside Vera during the war, declared, "The world owes to the men and women of SOE a debt that can never be fully discharged," he surely referred to Vera above all others." "After the war, Vera spent months combing the European countries where her agents had operated, tracing those who had been captured and seeking the truth about their fates, interrogating SS soldiers, concentration camp guards, even the conscienceless head of Auschwitz, Rudolf Hoess." "Demobilized in 1947, she retired to her beloved Winchelsea on the English Channel, refusing to discuss her wartime activities or release her private papers. Her close friend. William Stevenson, an author she greatly admired, was the only person she would trust to record her life - as he had done for Intrepid - with one condition: He would not publish her story until after her death."--BOOK JACKET.Stevenson, William is the author of 'Spymistress The Life Of Vera Atkins, The Greatest Female Secret Agent of World War II', published 2007 under ISBN 9781559707633 and ISBN 1559707631.