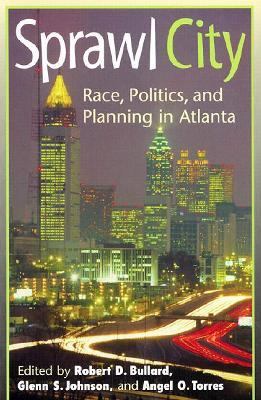 A serious but often overlooked impact of the random, unplanned growth commonly known as sprawl is its effect on economic and racial polarization. Sprawl-fueled growth pushes people further apart geographically, politically, economically, and socially. Atlanta, Georgia, one of the fastest-growing areas in the country, offers a striking example of sprawl-induced stratification.Sprawl Cityuses a multi-disciplinary approach to analyze and critique the emerging crisis resulting from urban sprawl in the ten-county Atlanta metropolitan region. Local experts including sociologists, lawyers, urban planners, economists, educators, and health care professionals consider sprawl-related concerns as core environmental justice and civil rights issues.Contributors focus on institutional constraints that are embedded in urban sprawl, considering how government housing, education, and transportation policies have aided and in some cases subsidized separate but unequal economic development and segregated neighborhoods. They offer analysis of the causes and consequences of urban sprawl, and outline policy recommendations and an action agenda for coping with sprawl-related problems, both in Atlanta and around the country.Contributors are Natalie Brown, Robert D. Bullard, William W. Buzbee, James Chapman, Dennis Creech, Russell W. Irvine, Charles Jaret, Chad G. Johnson, Glenn S. Johnson, Kurt Phillips, Elizabeth P. Ruddiman, and Angel O. Torres.The book illuminates the rising class and racial divisions underlying uneven growth and development, and provides a timely source of information for anyone concerned with those issues, including the growing environmental justice movement as well as planners, policy analysts, public officials, community leaders, and students of public policy, geography, or planning.Bullard, Robert D. is the author of 'Sprawl City Race, Politics, & Planning in Atlanta', published 2000 under ISBN 9781559637909 and ISBN 1559637900.