Sparknotes The Turn of the Screw, the Aspern Papers and Two Stories 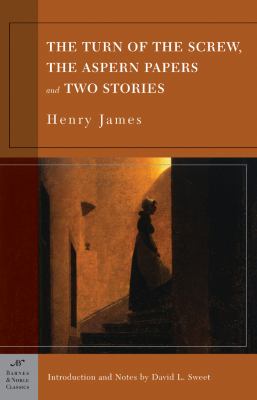 From David L. Sweet's Introduction toThe Turn of the Screw, The Aspern Papers, and Two Stories The Turn of the Screw, The Aspern Papers and Two Storiesbrings together for the first time in a single volume four of Henry James's most popular, most anthologized, and most artistically successful stories: the two mentioned by name plus "The Beast in the Jungle" and "The Jolly Corner." At first glance the collection suggests a miscellany, with two long stories and two short ones, two ghost stories and two secular ones, and each, except for the last two, written at very different stages of the author's career. Yet these generic incompatibilities soon yield before the pleasure of discovering a subtle consistency among them. If any one story establishes a framework for this unity, it isThe Turn of the Screw, around which the others are formally and thematically involved. But they are involved, perhaps, "in a direction unusual"--as James's narrator-governess describes her own efforts to confront the supernatural by redirecting her sense of the natural. It is this question of imaginatively adjusting the natural, of redeploying and reworking familiar ways of seeing in order to face down the apparently "unnatural," that jointly concerns these four fictions. James wrote what was to become his most famous tale in the wake of the popular failure of his playGuy Domvillein January 1895, when the author was personally subjected to catcalls and boos from the audience on opening night in London, an experience that terminated his cherished desire to be a celebrated dramatist (Edel,Henry James: A Life). After retreating, a week later, to the home of his friend Edward White Benson, the archbishop of Canterbury, James recorded a curious anecdote told by his host about two children in a country house to whom the ghosts of former servants, "wicked and depraved" (Kaplan,Henry James: The Imagination of Genius: A Biography,), had appeared. It is our first trace of a tale that the author would eventually make his own, most importantly through the creation of the unnamed governess who narrates it. The work is a tour de force of narrative ambiguity in that the reader can never decide whether the governess is protecting her young pupils from real ghosts or hysterically projecting the ghosts in response to deeply repressed libidinal yearnings. Though the latter reading was first proposed almost seventy years ago by the American critic Edmund Wilson and has been subjected to critical reappraisals ever since, it continues to influence much of the discussion of the work today (DeKoven, "Gender, History and Modernism inThe Turn of the Screw,"). Even in its initial serialization forCollier's Weeklyin 1898,The Turn of the Screwwas interpreted by some as an illustration of a psychological disorder rather than as an artfully written tale of the supernatural. James himself urbanely dismissed such interpretations during his lifetime, explaining to various doctors and psychologists that the parallels they detected between his governess and their patients were simply the effects of an overriding artistry: "My conscious intention strikes you as having been larger than I deserve it should be thought. It is the intention so primarily, with me, always, of the artist, the painter, that that , is what I most myself feel in it. . . . " To Frederic Myers, a colleague of his brother William at the Society for Psychical Research, James's response was more casual: He described the work as "a very mechanical matter, I honestly think--an inferior, a merely pictorial, subject and rather a shameless potboiler" (Kaplan, p. 413). Yet in resisting aJames, Henry is the author of 'Sparknotes The Turn of the Screw, the Aspern Papers and Two Stories ', published 2003 under ISBN 9781593080433 and ISBN 1593080433.

8 from $1.19
Loading marketplace prices 8 copies from $1.19 How does the rental process work?
View more