Sociopath Next Door The ruthless Versus the Rest of Us 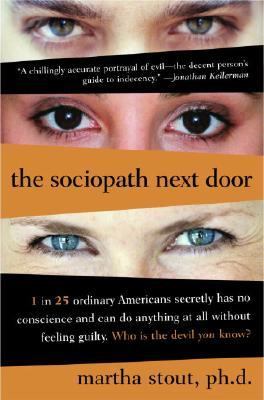 INTRODUCTION Minds differ still more than faces. --Voltaire Imagine--if you can--not having a conscience, none at all, no feelings of guilt or remorse no matter what you do, no limiting sense of concern for the well-being of strangers, friends, or even family members. Imagine no struggles with shame, not a single one in your whole life, no matter what kind of selfish, lazy, harmful, or immoral action you had taken. And pretend that the concept of responsibility is unknown to you, except as a burden others seem to accept without question, like gullible fools. Now add to this strange fantasy the ability to conceal from other people that your psychological makeup is radically different from theirs. Since everyone simply assumes that conscience is universal among human beings, hiding the fact that you are conscience-free is nearly effortless. You are not held back from any of your desires by guilt or shame, and you are never confronted by others for your cold-bloodedness. The ice water in your veins is so bizarre, so completely outside of their personal experience, that they seldom even guess at your condition. In other words, you are completely free of internal restraints, and your unhampered liberty to do just as you please, with no pangs of conscience, is conveniently invisible to the world.You can doanything at all, and still your strange advantage over the majority of people, who are kept in line by their consciences, will most likely remain undiscovered. How will you live your life? What will you do with your huge and secret advantage, and with the corresponding handicap of other people (conscience)? The answer will depend largely on just what your desires happen to be, because people are not all the same. Even the profoundly unscrupulous are not all the same. Some people-- whether they have a conscience or not-- favor the ease of inertia, while others are filled with dreams and wild ambitions. Some human beings are brilliant and talented, some are dull-witted, and most, conscience or not, are somewhere in between. There are violent people and nonviolent ones, individuals who are motivated by bloodlust and those who have no such appetites. Maybe you are someone who craves money and power, and though you have no vestige of conscience, you do have a magnificent IQ. You have the driving nature and the intellectual capacity to pursue tremendous wealth and influence, and you are in no way moved by the nagging voice of conscience that prevents other people from doing everything and anything they have to do to succeed. You choose business, politics, the law, banking, international development, or any of a broad array of other power professions, and you pursue your career with a cold passion that tolerates none of the usual moral or legal incumbrances. When it is expedient, you doctor the accounting and shred the evidence, you stab your employees and your clients (or your constituency) in the back, marry for money, tell lethal premeditated lies to people who trust you, attempt to ruin colleagues who are powerful or eloquent, and simply steam-roll over groups who are dependent and voiceless. And all of this you do with the exquisite freedom that results from having no conscience whatsoever. You become unimaginably, unassailably, and maybe even globally successful. Why not? With your big brain, and no conscience to rein in your schemes,you can doanything at all. Or no--let us say you are not quite such a person. You are ambitious, yes, and in the name of success you are willing to do all manner of things that people with conscience would never consider, but you are not an intellectually gifted individual. Your intelligence is above average perhaps, and people think of you as smart, maybe even very smart. But you know in your heart of hearts that you do not have the cognitive wherewithal, or the creativity, to reach the careening heightsStout, Martha is the author of 'Sociopath Next Door The ruthless Versus the Rest of Us', published 2005 under ISBN 9780767915816 and ISBN 076791581X.