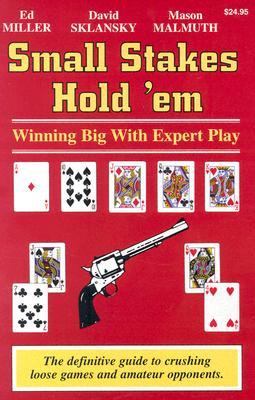 Ed Miller grew up in New Orleans, Louisiana. He received an S.B. in Physics and another in Computer Science and Electrical Engineering from MIT in 2000. After a year teaching, he moved to Redmond, Washington to work as a software developer for Microsoft. Looking for a new hobby, he deposited a couple hundred dollars in November 2001 to play $1-$2 and $2-$4 hold 'em online. After losing his initial stake, he sought to improve his game, and he found the books and website of Two Plus Two Publishing LLC. He participated in discussions on the forums at www.twoplustwo.com, and after a few months he turned his losses into wins in a $4-$8 game at a local card room. By January 2003, he had moved up to $10-$20 and $20-$40, and in March he left his job to play poker full-time. By then he had swapped roles on the online discussion forums from beginning player seeking advice to expert player giving it. After six more successful months playing in the Seattle area, he moved to Las Vegas, where he currently resides. Also in 2003, Dr. Alan Schoonmaker, the author of The Psychology of Poker, introduced Ed to David Sklansky and Mason Malmuth, and a partnership soon was born with this book being its first result. Today Ed usually plays between $10-$20 and $30-$60, but he can occasionally still be found in the $2-$4 to $6-$12 games around Las Vegas. David Sklansky is generally considered the number one authority on gambling in the world today. Besides his nine books on the subject, David also has produced two videos and numerous writings for various gaming publications. His occasional poker seminars always receive an enthusiastic reception including those given at the Taj Mahal in Atlantic City and the World Series of Poker in Las Vegas. More recently David has been doing consulting work for casinos, Internet gaming sites, and gaming device companies. He has recently invented a new game called Poker Challenge, soon to appear in casinos. David attributes his standing in the gambling community to three things: 1. The fact that he presents his ideas as simply as possible (sometimes with Mason Malmuth) even though these ideas frequently involve concepts that are deep, subtle, and not to be found elsewhere. 2. The fact that the things he says and writes can be counted on to be accurate. 3. The fact that to this day a large portion of his income is still derived from gambling (usually poker but occasionally blackjack, sports betting, horses, video games, casino promotions, or casino tournaments). Thus, those who depend on David's advice know that he still depends on it himself. Mason Malmuth was born and raised in Coral Gables, Florida. In 1973 he received his BS in Mathematics from Virginia Tech, and completed their Masters' program in 1975. While working for the United States Census Bureau in 1978, Mason stopped overnight in Las Vegas while driving to his new assignment in California. He was immediately fascinated by the games, and gambling became his major interest. After arriving in California he discovered that poker was legal and began playing in some of the public cardrooms as well as taking periodic trips to Las Vegas where he would play both poker and blackjack. In 1981 he went to work for the Northrop Corporation as a mathematician and moved to Los Angeles where he could conviently pursue his interest in poker in the large public cardrooms in Gardena, Bell Gardens, and Commerce. In 1983 his first article "Card Domination - The Ultimate Blackjack Weapon" was published in Gambling Times magazine. In 1987 he left his job with the Northrop Corporation to begin a career as both a full-time gambler and a gambling writer. He has had over 500 articles published in various magazines and is the author or co-author of 13 books. These include Gambling Theory and Other Topics, where he tries to demonstrate why only a small number of people are highly successful at gambling. In this book he introduces the reader to the concept of "non-self weighting strategies" and explains why successful gambling is actually a balance of luck and skill. Other books he has co-authored are Hold 'em Poker For Advanced Players, written with David Sklansky, and Seven-Card Stud For Advanced Players written with David Sklansky and Ray Zee. All the "advanced" books are considered the definitive works on these games. His company Two Plus Two Publishing has sold over 600,000 books and currently has 27 titles to its credit. These books are recognized as the best in their field and are thoroughly studied by those individuals who take gambling seriously.Miller, Edward is the author of 'Small Stakes Hold 'em Winning Big With Expert Play', published 2004 under ISBN 9781880685327 and ISBN 1880685329.