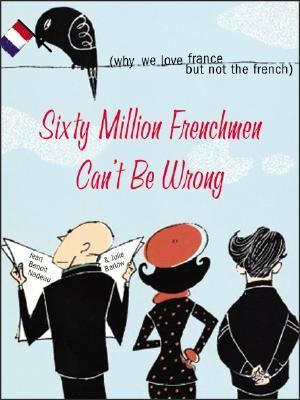 Excerpt from Chapter 1: Meet the Aborigines When we arrived in Paris at the beginning of Jean-Benoît's fellowship, it was only the second time we had set foot in France. We were tourists, and at the outset we looked at France through the eyes of vacationers. Whenever we could squeeze some free time out of the jumble of immigration, housing, and banking predicaments that monopolized our first few months in Paris, we strolled the streets in awe. The city and its monuments seemed ancient beyond belief. We visited a park in the Latin Quarter that was the site of a Roman arena from the first century A.D. In the very place we were observing smartly dressed, well-behaved little French children chasing balls under the watchful gaze of their nannies, ten thousand citizens of the Roman Empire once watched gladiator combats. The idea made us giddy. Everywhere we went we saw remnants of a past we could hardly imagine. We scrutinized rows of fifteenth-century houses on the left bank whose facades still slanted backward according to medieval construction techniques. The proud owner of a restaurant next to the Paris city hall led us down to his basement to show us the building's thirteenth-century foundation. But one of our most acute time-warp sensations came months later, after a hike along the Seine river that ended in La Roche Guyon, a small town built on a bend of the river twenty miles west of Paris. The founders of La Roche Guyon chose a spectacular location for their village, nestling it between the river and a four hundred - foot cliff of white chalk. The more we looked around, the more La Roche Guyon impressed us with its historical layers. On the highest spur, right over the town of La Roche Guyon, there was a twelfth-century dungeon. At the base of the dungeon there was a Renaissance castle. In the cliff behind the castle, we saw the bunker where the German Marshal Erwin Rommel (1891 - 1944) defended Normandy against the Allies in World War II (the way he saw it, anyway). Then, as we walked across the town, we noticed several dozen houses dug straight into the cliff. The houses had neat French facades and Peugeots parked in front of them. We asked the nearby shopkeepers about them and were told that the houses were actually ancient cave dwellings, updated with modern amenities, and still inhabited. Like many North Americans, who live on a slate wiped clean of history, we never got over the thrill of carrying out our modern lives among Roman ruins and medieval churches. Even though a lot of the monuments and structures we saw predated the founding of America, they were just part of people's daily lives in modern France. Sometimes we found them in completely unsuspecting places. East of La Rochelle, the utterly uninspiring city of Angoulême boasts nothing less than a Gothic city hall. In Provence, Avignon's massive Palace of the Popes, built in the fourteenth century, sits smack in the middle of the city's bustling downtown. To top off this effect of strange historical juxtapositions, we noticed that in many French cities, modern and ancient structures were built out of stone the same color as the gravel in the alleys. In other words, French cities looked like they had gradually grown out of the soil over the centuries, or in some cases, the millennia. Paris's Notre Dame Cathedral (the part they've cleaned, anyway) is the beige color of the city's native stone, and so is the Louvre, the Versailles palace, and even twentieth-century apartment buildings. Later, this helped us make one of our first breakthroughs in understanding France: it is impossible to disassociate the past from the present. There is no clear line to divide ancient from modern in France, and what goes for architecture, goes for the people, too. As a society, they slowly grew out of the soil. It's as if they live in the past and the present at the same time. Yet it took us a while to figure out what that actually meant. Our firstNadeau, Jean-Benoit is the author of 'Sixty Million Frenchmen Can't Be Wrong Why We Love France but Not the French', published 2003 under ISBN 9781402200458 and ISBN 1402200455.