Six Lessons for Six Sons An Extraordinary Father, a Simple Formula for Success 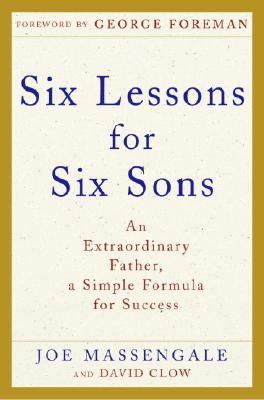 Lesson One CONFIDENCE Preface by Guion S. "Guy" Bluford, Jr., Ph.D. I was fourteen years old in 1957, and a student at Overbrook High School in Philadelphia, when the Soviet Union launched the first satellite, a little silver sphere called Sputnik. It was a startling moment for America, and like the rest of the nation, my family listened with concern to the signal on the radio, a raspy beep beep beep, as it passed overhead. The airplane was invented by Americans. The first pilot to fly the Atlantic solo was American. So was the first to fly over the South Pole. We expected to be the first nation into space. We were wrong. We were wrong again when I was a freshman at Penn State in April 1961, when Vostok 1 carried Senior Lieutenant Yuri Gagarin into the first manned Earth orbit. America was humbled. It wasn't just a matter of bragging rights between rival countries. This was the middle of the Cold War. Our leaders viewed supremacy in space as vital to survival on the ground. We had to win because we had to survive. And we were behind. Moments like that shook the confidence of the nation. But we came back, daring ourselves to reach and work, to lose for the moment if losses happened, but never to give up. We made fatal mistakes. We lost admirable people on the way. But the impossible goal President Kennedy set for America, to be on the moon by 1970, became possible by the combination of technical achievement and sheer will. We might sometimes take for granted today what was so challenging and dangerous at the time. We might assume that because the early explorers made it look easy, it was. If we make the mistake of taking a difficult thing lightly, we miss the point: it's fun to do the hard things. It's fulfilling to set an impossible task and reach it. No one grows by settling for the possible. Nothing gets better by staying the same. My parents never needed to repeat ideas like this to my brothers and me when we were growing up. They both had master's degrees, and it was understood that we'd all go to college and all seek to stretch ourselves in challenging fields. A counselor once told me that I wasn't college material, perhaps because I wasn't the most enthusiastic reader in high school unless it was something about engineering or math. It might make my story more romantic if I could say I was inspired by being underestimated, and all the more determined to succeed. The truth is, I ignored that counselor. I'd been raised to know what I wanted, and to pursue it no matter what, and I knew I had what I needed. I knew it when I was one of a handful of African-American students at school, and when I was training for combat, and when I wanted to fly on the shuttle. Confidence was my parents' greatest gift. Nothing could take it from me. This nation could have given up at the sound of that little beep beep beep doing what we'd failed to do in 1957. Instead, we pushed ahead. I might have given up at being told I wouldn't be able to live my dreams. I didn't, and neither should you. Never give up. Never. I had a moment of free time now and then while looking down from orbit over the earth, riding the space shuttle along the same trajectory as Sputnik and Gagarin, taking the same step that the astronauts before me took to the moon and that the ones to come will take on their way to the stars, to think about the confidence my folks gave me. I knew that that's what put me there. Imagine where it might take you. Guy Bluford, Jr., Ph.D., spent fifteen years with NASA as one of its elite astronauts. The first African-American in space, he was inducted into the International Space Hall of Fame in 1997. Today Dr. Bluford serves as president of the Aerospace Technology Group (ATG), an aerospace technology and business consulting organization, and conducts a very active civic life. JOE MASSENGALE was seven years old when his father left theMassengale, Joe is the author of 'Six Lessons for Six Sons An Extraordinary Father, a Simple Formula for Success', published 2006 under ISBN 9780307238108 and ISBN 0307238105.