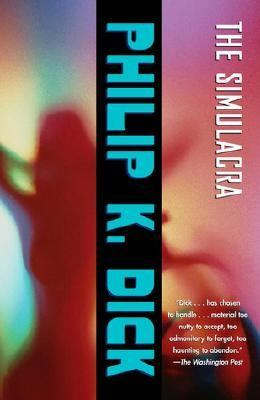 one The interoffice memo at Electronic Musical Enterprise frightened Nat Flieger and he did not know why. It dealt, after all, with a great opportunity; the famed Soviet pianist Richard Kongrosian, a psycho-kineticist who played Brahms and Schumann without manually approaching the keyboard, had been located at his summer home in Jenner, California. And, with luck, Kongrosian would be available for a series of recording sessions with EME. And yet-- Perhaps, Flieger reflected, it was the dark, wet forests of the extreme northern coastal region of California which repelled him; he liked the dry southlands near Tijuana, here where EME maintained its central offices. But Kongrosian, according to the memo, would not come out of his summer home; he had entered semi-retirement possibly due to some unknown domestic situation, hinted to be a tragedy involving either his wife or his child. This had happened years ago, the memo implied. It was nine in the morning. Nat Flieger reflexively poured water into a cup and fed the living protoplasm incorporated into the Ampek F-a2 recording system which he kept in his office; the Ganymedean life form did not experience pain and had not yet objected to being made over into a portion of an electronic system . . . neurologically it was primitive, but as an auditory receptor it was unexcelled. Water trickled through the membranes of the Ampek F-a2 and was gratefully absorbed; the conduits of the living system pulsed. I could take you along, Flieger decided. The F-a2 was portable and he preferred its curve to later, more sophisticated equipment. Flieger lit a delicado, walked to the window of his office to switch the blind to receive; warm Mexican sunlight burst in and he blinked. The F-a2 went into a state of extreme activity, then, utilizing the sunlight and the water, its metabolic processes stimulated. From habit Flieger watched it at work, but his mind was still on the memo. Once more he picked up the memo, squeezed it, and it instantly whined, ". . . this opportunity presents EME with an acute challenge, Nat. Kongrosian refuses to perform in public but we have a contract through our Berlin affiliate, Art-Cor, and legally we can make Kongrosian record for us . . . at least if we can get him to stand still long enough. Eh, Nat?" "Yes," Nat Flieger said, nodding absently, replying to Leo Dondoldo's voice. Why had the famed Soviet pianist acquired a summer home in northern California? That in itself was radical, frowned on by the central government in Warsaw. And if Kongrosian had learned to defy the ukases of the supreme Communist authority he could scarcely be expected to flinch from a showdown with EME; Kongrosian, now in his sixties, was a professional at ignoring the legal ramifications of contemporary social life, either in Communist lands or in the USEA. Like many artists, Kongrosian traveled his own way, somewhere in between the two overpowering social realities. A certain amount of hucksterism would have to be brought into such a pressing as this. The public had a short memory, as was well-known; it would have to be forcibly reminded of Kongrosian's existence and musical cum Psionic talents. But EME's publicity department could readily handle it; after all, they had managed to sell many an unknown, and Kongrosian, for all his momentary obscurity, was scarcely that. But I wonder just how good Kongrosian is today, Nat Flieger reflected. The memo was trying to to sell him on that, too. ". . . everybody knows that Kongrosian has up until quite recently played before private gatherings," the memo declared fervently. "For bigwigs in Poland and Cuba and before the Puerto Rican elite in New York. One year ago, in Birmingham, he appeared before fifty Negro millionaires for benefit purposes; the funds raised went to help with Afro-Moslem lunar type colonization. I talked to a couple of modern composers wDick, Philip K. is the author of 'Simulacra', published 2002 under ISBN 9780375719264 and ISBN 0375719261.