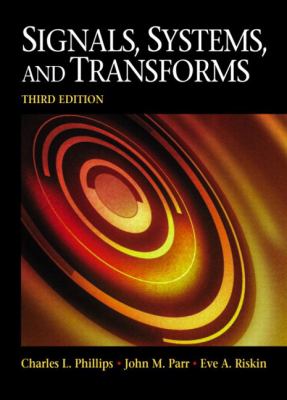 The basic structure and philosophy of the previous editions ofSignals, System and Transformsare retained in the third edition. New examples have been added and some examples have been revised to demonstrate key concepts more clearly. New figures have been added to better illustrate concepts such as abasing, orthogonality of exponentials, data reconstruction, etc. The wording of many passages throughout the text has been revised to ease reading and improve clarity. In particular, we have greatly simplified the development of convolution, the Fourier Transform, and the Discrete Fourier Transform. Further, we use sidebars in Sections 2.1 and 2.7 to demonstrate real-world applications of the material. Chapters 5, 6, and 12 have been reorganized to consolidate the presentation on sampling and data construction and to reduce redundancy. Many end-of-chapter problems have been revised and numerous new problems are provided. Several of these new problems illustrate real-world concepts in digital communications, filtering, and control theory. In addition, in response to requests from students at our universities, we have included answers to selected problems in Appendix H. We hope that this will enable the student to obtain immediate feedback about his/her understanding of new material and concepts. All MATLAB examples have been updated to ensure compatibility with Student Version Release 12. Several new MATLAB examples have been added. New to this edition is a third co-author, Professor Eve Riskin from the University of Washington. Professor Riskin has contributed many ideas for the text including a companion web site at http://www.ee.washington.edu/class/SST_textbook/textbook.html . This web site contains sample laboratories, lecture notes for Chapters 1-7 and Chapters 9-12, and the MATLAB files listed in the textbook as well as several additional MATLAB files. It also contains a link to a second web site athttp://www.ee.washington.edu/class/235dl/, which contains interactive versions of the lecture notes for Chapters 1-7. Here, students and professors can find worked-out solutions to all the examples in the lecture notes, as well as animated demonstrations of various concepts including transformations of continuous-time signals, properties of continuous-time systems (including numerous examples on time-invariance), convolution, sampling, and aliasing. Additional examples for discrete-time material will be added as they are developed. In addition to the website listed above, the Department of Electrical Engineering, University of Washington, maintains an electronic mail list server for your use. For information on how to subscribe and unsubscribe, simply send a plain text E-mail message with the word HELP as the message body (aril nothing else) tosst_textbook-request@ee.washington.edu. This list server will a used to communicate any typos found in the book or solution manual as well as point out new updates to the above-mentioned web pages. This book is intended to be used primarily as a text for junior-level students in engineering curricula and for self-study by practicing engineers. It is assumed that the reader has had some introduction to signal models, system models, and differential equations (as in, for example, circuits courses and courses in mathematics), and some laboratory work with physical systems. The authors have attempted to consistently differentiate between signal and system models and physical signals and systems. Although a true understanding of this difference can be acquired only through experience, readers should understand that there are usually significant differences in performance between physical systems and their mathematical models. We have attempted to relate the mathematical results to physical systems that are familiar to the readers (for example, thePhillips, Charles L. is the author of 'Signals, Systems, and Transforms', published 2002 under ISBN 9780130412072 and ISBN 0130412074.