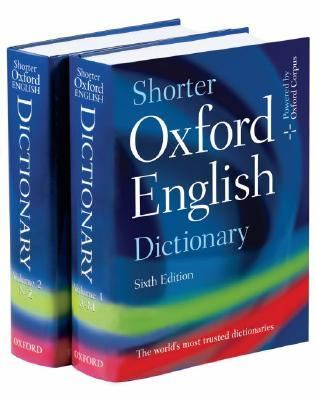 Here is a new edition of the acclaimed Shorter Oxford English Dictionary, the first since 2002, updated, enlarged, and enlivened by new words, new definitions of old words, new illustrative quotations--and a new, fully customizable CD-ROM. If the 20-volume Oxford English Dictionary is the mother of all dictionaries, the Shorter is its most accomplished offspring. At one-tenth the size of OED--and a fraction of the price--the Shorter offers one-third the content and the same quality of lexical excellence of its parent dictionary. Indeed, no other dictionary, apart from the OED itself, comes close to the Shorter's range and depth, offering over 500,000 definitions that cover virtually every word or phrase in use in English--worldwide--since 1700. Each entry offers everything you would expect from a leading unabridged dictionary: it identifies each word's various meanings, origins, part of speech, pronunciation, and combinations in which the word is often found, as well as cross-references to related words. The Shorter, however, offers something that no competitor can match: the historical, literary approach made justly famous by the OED. Thousand upon thousands of changing meanings are followed throughout history, illustrated by 85,000 quotations from 7,000 authors. And now, with 2,500 new words and 500 new quotations, the Shorter is fresher than ever, fully responsive to ever-changing English language. The SOED has opened its pages to the thousands of new words which have come into use since the previous edition and which have expanded the precision and expressive power of English. Here are such new words as Afrobeat, carbon-neutral, darknet, heaviosity, impactful, knuckle-dragger, nanomaterial, retro-futurist, smoosh, testosteronic, webinar, and thousands more. (To call someone a testosteronic, retro-futurist knuckle-dragger is no longer an incomprehensible insult). Oxford's esteemed lexicographers have given this new edition a major rewrite, modernizing out-of-date definitions to reflect current meanings and associations. For example, the definition for villain has been updated from "A rouge, a rascal" to "A criminal or disreputable person." Hussy, formerly defined as "A woman of light or worthless character; a pert girl," now reads "An impudent or immoral girl or woman." The SOED is further enhanced by new illustrative quotations, from such writers as Monica Ali, Anthony Bourdain, Charles Bukowski, Susan Faludi, Matt Groening, Spike Lee, P.J. Rourke, Isaac Bashevis Singer, Zadie Smith, and hundreds more. The most impressive innovation in this new edition, however, is the CD-ROM, a $99.00 stand-alone value, which contains the entire Shorter Oxford English Dictionary, 6th Edition. Designed to run on Mac as well as Windows operating systems, the CD-Rom has an attractive, easy-to-use, and fully customizable interface, similar Google's, and offers users a wide range of advanced search options and unique features: BLEnable/disable case-sensitive searching BLLimit searches by the date of a word's first recorded use BLLimit searches to specific areas in entries BLSearch definitions, etymologies, labels (subject, geographical region, register), source language BLListen to pronunciations for over 100,000 words BLAccess Shorter Oxford English Dictionary definitions from other applications though automatic look-up BL Cross-reference any word in the dictionary with a single mouse click BLInstall the SOED to the hard disk and run it without the CD-ROM BLCrossword puzzle solver and anagram solver For anyone without the shelf space for the 20-volume OED, the Shorter is the very best alternative--a glorious achievement in its own right, a resource as capacious and inexhaustible as the language itself. KEY FEATURES: BL Major new edition revised and updated with over 2,500 new words and meanings BL500 new quotations BLAccompanied by fully customizable CD-Rom BLMorShorter Oxford English Dictionary, 6 was published 2007 under ISBN 9780199233243 and ISBN 0199233241.