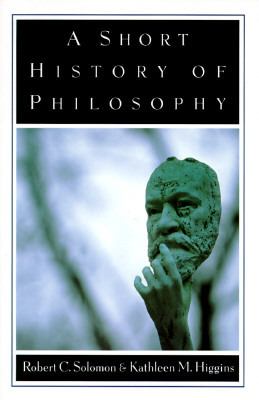 Philosophy is a singularly expansive enterprise, a fascinating outgrowth of a human nature that demands we question who and why we are. In A Short History of Philosophy, the most accessible concise portrait of philosophy in seventy years, Robert Solomon and Kathleen Higgins meet the challenge of accurately and engagingly describing it all, revelling in philosophy as "the art of wonder," the search for meaning, a gripping, dramatic endeavor. Here is the entire history of philosophy--ancient, medieval, and modern, from cultures both East and West--described in its historical and cultural context. "The concepts that lie at the heart of philosophy antedate history by thousands of years," the authors write in their introduction, noting that the ancient concept of immortality, prehistorical ideas about magic, and the complex set of beliefs implied by the practice of human sacrifice all exhibit philosophic underpinnings. Solomon and Higgins chart the profound development of philosophical thought around the world and through the centuries from the first stirrings of speculation and wonder to the rise of distinct (and often antithetical) philosophical traditions, moral constructs, and religious practices. From the early Greek and Asian philosophers and the mythological traditions that preceded them, to the great Greek, Indic, and Chinese philosophers, to the drama of the great religious philosophies, the authors have spun a marvelous tale that leads to the development and decline of modernity. Along with the major characters, such as Aristotle, Kant, and Confucius, Solomon and Higgins draw engaging portraits of less well-known alchemists, mystics, rebels, eccentrics of all sorts, including figures often ignored in philosophy--figures such as Teresa of Avila, who contributed to the mystical traditions of Catholicism; al-Razi, a contrarian Persian philosopher within the Arabic tradition who described the philosophical life as "godlike;" and Erasmus, the Dutch philosopher who parodied the foolishness of man in his praise of folly. With a clear, witty style and a flair for making complex ideas accessible, the authors also convincingly demonstrate the relevance of philosophy to our times, emphasizing the legacy of the revolutions wrought by science, industry, colonialism, and sectarian warfare, and the philosophical responses to the traumas of the twentieth century (including two world wars and the Holocaust): existentialism, positivism, postmodernism, feminism, and multiculturalism among them. But Solomon and Higgins go beyond merely retelling the rich history of philosophy; the authors provide their own twists and interpretations of events, resulting in a story that reveals the continuing complexity and diversity of a richly textured and nuanced intellectual tradition. All who are "lovers of wisdom" will find much to reward them in this book.Solomon, Robert C. is the author of 'Short History of Philosophy' with ISBN 9780195086478 and ISBN 0195086473.