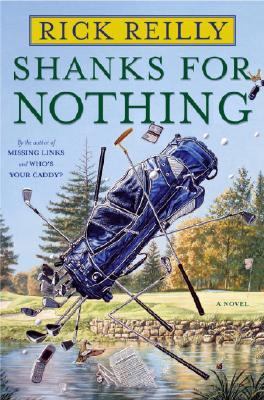 CHAPTER 1 I distinctly remember the day my life started smother-hooking toward Hell. It was just another day of gentlemanly golfing competition among the Chops at Ponkaquogue Municipal Golf Links and Deli, known across the land as America's worst golf facility. It was our usual fivesome: Two Down, Hoover, Cementhead, Dannie--the hot-tempered, hot-blooded little five-handicap who also doubled as my wife--and me. "Are those shorts heavily padded?" Dannie asked Cementhead. "What's it to you?" Cement said. " 'Cause I'm about to give you a serious butt-kickin'." Across the way, the hyper Leonard "Two Down" Petrovitz--half-man, half-cappuccino--was locked in mortal combat with me in a game of $20 one-down automatic press bets. Of course, he couldn't have been too worried, since he was beating me like Liza's ex. I'd given him half a shot a hole, plus a hundred-yard head start on every hole, plus one throw a side. And yet, just because he was beating me didn't mean he was going to stoop to any gamesmanship. "I see you changed your putter since last time," Two Down observed. "I guess that last one didn't float so good." "Keep it up, Chirpy," I said. "And you'll be joining it." Ponky was famous around Boston for three things: 1) Being full of morons who bet way more than they had; 2) Being to golf what Velveeta was to French culinary schools; 3) Being next door to one of the great courses in America, the blue-blooded high-hatted Mayflower Club, whose members were so choosy about who they accepted they simply stopped letting people in three years ago. The line around town was, not even the original Pilgrims could get into the Mayflower now. Since Ponky and the Mayflower were built in the 1900s, one by Donald Ross and one by Ronald Ross--a small mistake made by the city fathers--the two courses had moved in opposite directions from birth until one became the very symbol of posh blue-blood aristocracy and the other of fried-egg SPAMwiches. Now, the only thing that separates the Mayflower and Ponky is a twelve-foot-high redbrick wall, a whole lot of deb balls, and general good breeding. The Mayflower was so stuck up it had refused to even host a U.S. Open or a PGA or a Ryder Cup, despite being begged. Never, that is, until five years ago, when it agreed to finally lower itself to play host to the greatest players in the world at the U.S. Open, which would descend upon it the following summer. Not that they didn't have events. They had their lavish "Pilgrimage" every year, and their "Heritage Hoopla" and their "Member-Member" (never a member-guest). And whenever they hosted such prestigious events, they rented Ponky's course out to park all the Bentleys that strutted through. For the month after, you'd get tire-track lies in the middle of the fairways. But what could we do? We were privately owned by the cheapest man in the world--Froghair. Froghair got his name for his length off the tee, which was none at all. He averaged about a buck-eighty. He was straight, though, so we said he led the tour in FIR (Froghair in Regulation). Froghair would rent Ponky out to Islamic Hamas if he thought he could get an extra thirty-seven dollars out of it. It always delighted us to see those Numerals--you know, your Worth Havermayer III and your Gray Stoneham the IV--get out of their cherry cars and take a look around at the eighteen-hole municipal dump that is Ponky. We loved to watch their faces react in horror at the course we played every day, the abandoned '57 Jell-O green Chevy near the 8th tee, sitting as it did just under the half of a Boston Globe billboard that jutted out over the tee box. We giggled to see them hurry away from our battleground practice range, where bad golfers hailed cut, yellowed practice bReilly, Rick is the author of 'Shanks for Nothing', published 2006 under ISBN 9780385501118 and ISBN 0385501110.