Shadow of the Hegemon 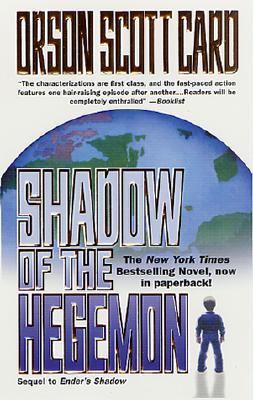 1 Petra To: Chamrajnagar%sacredriver@ifcom. gov From: Locke%espinoza@polnet. gov Re: What are you doing to protect the children? Dear Admiral Chamrajnagar, I was given your idname by a mutual friend who once worked for you but now is a glorified dispatcherI'm sure you know whom I mean. I realize that your primary responsibility now is not so much military as logistical, and your thoughts are turned to space rather than the political situation on Earth. After all, you decisively defeated the nationalist forces led by your predecessor in the League War, and that issue seems settled. The I. F. Remains independents and for that we are all grateful. What no one seems to understand is that peace on Earth is merely a temporary illusion. Not only is Russia's long-pent expansionism still a driving force, but also many other nations have aggressive designs on their neighbors. The forces of the Strategos are being disbanded, the Hegemony is rapidly losing all authority, and Earth is poised on the edge of cataclysm. The most powerful resource of any nation in the wars to come will the children trained in Battle, Tactical, and Command School. While it is perfectly appropriate for these children to serve their native countries in future wars, it is inevitable that at least some nations that lack such I. F. -certified geniuses or who believe that rivals have more-gifted commanders will inevitably take preemptive action, either to secure that enemy resource for their own use or, in any event, to deny the enemy the use of that resource. In short, these children are in grave danger of being Kidnapped or Killed. I recognize that you have a hands-off policy toward events on Earth, but it was the I. F. that identified these children and trained them, thus making them targets. Whatever happens to these children, the I. F. has ultimate responsibility. It would go a long way toward protecting, warning any nation or group attempting to harm or interfere with them that they would face swift and harsh military retribution. Far from regarding this as interference in Earthside affairs, most nations would welcome this action, and, for whatever it is worth, you would have my complete support in all public forums. I hope you will act immediately. There is no time to waste. Respectfully, Locke * * * Nothing looked right in Armenia when Petra Arkanian returned home. The mountains were dramatic, of course, but they had not really been part of her childhood experience. It was not until she got to Maralik that she began to see things that should mean something to her. Her father had met her in Yerevan while her mother remained at home with her eleven-year-old brother and the new babyobviously conceived even before the population restrictions were relaxed when the war ended. They had no doubt watched Petra on television. Now, as the flivver took Petra and her father along the narrow streets, he began apologizing. "It won't seem much to you, Pet, after seeing the world." "They didn't show us the world much, Papa. There were no windows in Battle School." "I mean, the spaceport, and the capital, all the important people and wonderful buildings ..." "I'm not disappointed, Papa." She had to lie in order to reassure him. It was as if he had given her Maralik as a gift, and now was unsure whether she liked it. She didn't know yet whether she would like it or not. She hadn't liked Battle School, but she got used to it. There was no getting used to Eros, but she had endured it. How could she dislike a place like this, with open sky and people wandering wherever they wanted? Yet shewasdisappointed. For all her memoriesCard, Orson Scott is the author of 'Shadow of the Hegemon' with ISBN 9780812565959 and ISBN 0812565959.