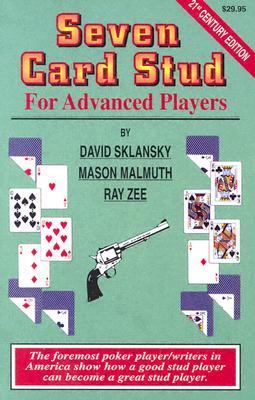 David Sklansky is generally considered the number one authority on gambling in the world today. Besides his nine books on the subject, David also has produced two videos and numerous writings for various gaming publications. His occasional poker seminars always receive an enthusiastic reception including those given at the Taj Mahal in Atlantic City and the World Series of Poker in Las Vegas. More recently David has been doing consulting work for casinos, Internet gaming sites, and gaming device companies. He has recently invented a new game called Poker Challenge, soon to appear in casinos. David attributes his standing in the gambling community to three things: 1. The fact that he presents his ideas as simply as possible (sometimes with Mason Malmuth) even though these ideas frequently involve concepts that are deep, subtle, and not to be found elsewhere. 2. The fact that the things he says and writes can be counted on to be accurate. 3. The fact that to this day a large portion of his income is still derived from gambling (usually poker but occasionally blackjack, sports betting, horses, video games, casino promotions, or casino tournaments). Thus, those who depend on David's advice know that he still depends on it himself. Mason Malmuth was born and raised in Coral Gables, Florida. In 1973 he received his BS in Mathematics from Virginia Tech, and completed their Masters' program in 1975. While working for the United States Census Bureau in 1978, Mason stopped overnight in Las Vegas while driving to his new assignment in California. He was immediately fascinated by the games, and gambling became his major interest. After arriving in California he discovered that poker was legal and began playing in some of the public cardrooms as well as taking periodic trips to Las Vegas where he would play both poker and blackjack. In 1981 he went to work for the Northrop Corporation as a mathematician and moved to Los Angeles where he could conviently pursue his interest in poker in the large public cardrooms in Gardena, Bell Gardens, and Commerce. In 1983 his first article "Card Domination - The Ultimate Blackjack Weapon" was published in Gambling Times magazine. In 1987 he left his job with the Northrop Corporation to begin a career as both a full-time gambler and a gambling writer. He has had over 500 articles published in various magazines and is the author or co-author of 12 books. These include Gambling Theory and Other Topics, where he tries to demonstrate why only a small number of people are highly successful at gambling. In this book he introduces the reader to the concept of "non-self weighting strategies" and explains why successful gambling is actually a balance of luck and skill. Other books he has co-authored are Hold 'em Poker For Advanced Players, written with David Sklansky, and Seven-Card Stud for Advanced Players written with David Sklansky and Ray Zee. All the "advanced" books are considered the definitive works on these games. His company Two Plus Two Publishing has sold over 300,000 books and currently has 22 titles to its credit. These books are recognized as the best in their field and are thoroughly studied by those individuals who take gambling seriously. Ray Zee was born and raised in New Jersey, and spent his college years in the East as well. Unlike other students, Ray did more than just study. He began to gamble on the side in school, and when he graduated he was ready to start his career, which just happened to be in the dessert of Nevada. Ray quickly realized that there were many opportunities in various forms of gambling and began to search for ways to exploit the inequities in many of the games. This included blackjack, horse racing, sports betting, slot jackpots, and of course his favorite game, poker. It wasn't long before he became known as one of the top poker players and most knowledgeable gamblers in the world. And when we say world, we mean it literally because there are very few places where gambling is offered that Ray has not visited. In fact, you can go to many cardrooms all over the world, mention the name Ray Zee, and get an immediate response. Ray usually chooses to play in very high stakes cash games, many of which feature some of the best players in the world. It has been said that "He leaves them with their eyes wide open when he departs." Ray is also one of the very few players that is considered expert in virtually every form of poker played for serious money. He is also one of the very few gamblers (still around) that has been to all the World Series of Poker Tournaments at Binnions Horseshoe Hotel and Casino in Las Vegas. Rays book, High-Low-Split Poker for Advanced Players is recognized as the premier book on split pot games, and this has increased his following and helped to promote these games as well. He is considered an invaluable member of the Two Plus Two Publishing team, and his advice and wisdom is widely sought by many of his peers and adversaries at the gaming tables.Sklansky, David is the author of 'Seven Card Stud for Advanced Players', published 1999 under ISBN 9781880685235 and ISBN 188068523X.