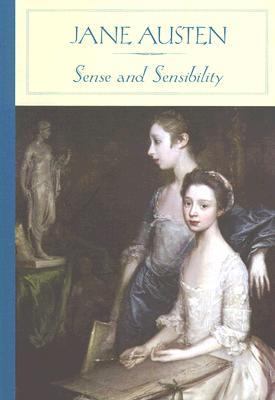 From Laura Engel's Introduction toSense and Sensibility Sense and Sensibility, Jane Austen's first published novel, tells the story of the lives, loves, and longings of two sisters, the sensitive, romantic Marianne and the practical, even-tempered Elinor. With its extended cast of supporting characters, including the garrulous Mrs. Jennings, the stern Mr. Palmer, and the censorious Mrs. Ferrars,Sense and Sensibilityrevolves around two narratives: the possible romances of Elinor and Marianne Dashwood and the day-to-day existence of everyone else. The constant anxiety that pervades the story stems from the possibility that the sisters may have to make do with the mundanity of country life, cluttered with gossip, clamor, and superficiality, instead of being swept away by the men of their dreams. In typical Austen fashion we are made aware from the outset that Marianne's choice of suitor, the dashing and theatrical Willoughby, may be a disaster. Elinor's more subdued love object, the shy and awkward Edward Ferrars, on the other hand, just might prove himself worthy if he could manage to articulate a full sentence. Austen began working onSense and Sensibilityin 1795 with an epistolary fragment entitled "Elinor and Marianne" (now lost). The final version was not published until 1811, with a second edition issued in 1813 (Austen-Leigh,Jane Austen: Her Life and Letters). Once described as "bleak, dark, and nasty" compared with the "brightness" ofPride and Prejudiceor the complexity of her more mature worksEmma,Mansfield Park, andPersuasion,Sense and Sensibilityhas recently undergone a critical renaissance. New editions, renewed scholarship, and a critically acclaimed film version have put the novel center stage. Sense and Sensibilityis a coming-of-age novel, and also a work that chronicles Austen's own "coming of age"her development as a writer. When she began working on "Elinor and Marianne" she was only twenty, a young woman with the possibility of courtship, marriage, and family open to her. By the time the second edition of the novel was released, Austen had moved from Hampshire to Bath, lost her adoring father, been disappointed in love, rejected a marriage proposal, and relocated again with her mother and sister to Chawton, where she turned her attention to writing. Austen's sense of herself in the world must have been influenced by her close relationship with her only sister, Cassandra, who similarly was disappointed in love and in the awkward position of elder spinster aunt to a large and noisy upper-middle-class country family. The only surviving portrait of Austen, a watercolor sketch by her sister, depicts the author as a plain, pensive subject with large eyes and a slight hint of a smile. She appears proper and subdued, unlike the description of her by a family friend, who pronounced her "certainly prettybright & a good deal of colour in her facelike a doll" (Tomalin,Jane Austen: A Life). Austen's niece Anna's view of her aunt matches Cassandra's portrayal of her: "Her complexion [is] of that rare sort which seems the particular property of light brunettes: a mottled skin, not fair, but perfectly clear and healthy; the fine naturally curling hair, neither light nor dark; the bright hazel eyes to match the rather small, but well shaped nose" (Austen-Leigh). In keeping with Austen's status as a respectable daughter of a clergyman,Sense and Sensibilitywas first published anonymously. The initial advertisement for the novel, which appeared in theMorning Chronicleon October 31, 1811Austen, Jane is the author of 'Sense and Sensibility ', published 2004 under ISBN 9781593083366 and ISBN 159308336X.