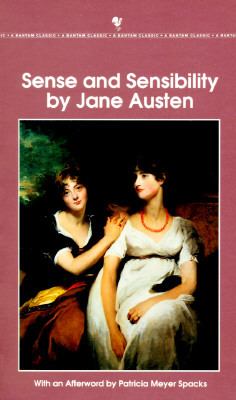 Sense and Sensibility, the first of those metaphorical bits of "ivory" on which Jane Austen said she worked with "so fine a brush," jackhammers away at the idea that to conjecture is a vain and hopeless reflex of the mind. But I'll venture this much: If she'd done nothing else, we'd still be in awe of her. Wuthering Heights alone put Emily Bronte in the pantheon, and her sister Charlotte and their older contemporary Mary Shelley might as well have saved themselves the trouble of writing anything but Jane Eyre and Frankenstein. Sense and Sensibility, published in 1811, is at least as mighty a work as any of these, and smarter than all three put together. And it would surely impress us even more without Pride and Prejudice (1813), Mansfield Park (1814), and Emma (1815) towering just up ahead. Austen wrote its ur-version, Elinor and Marianne, when she was nineteen, a year before First Impressions, which became Pride and Prejudice; she reconceived it as Sense and Sensibility when she was twenty-two, and she was thirty-six when it finally appeared. Like most first novels, it lays out what will be its author's lasting preoccupations: the "three or four families in a country village" (which Austen told her niece, in an often-quoted letter, was "the very thing to work on"). The interlocking anxieties over marriages, estates, and ecclesiastical "livings." The secrets, deceptions, and self-deceptions that take several hundred pages to straighten out-to the extent that they get straightened out. The radical skepticism about human knowledge, human communication, and human possibility that informs almost every scene right up to the sort-of-happy ending. And the distinctive characters-the negligent or overindulgent parents, the bifurcating siblings (smart sister, beautiful sister; serious brother, coxcomb brother), the charming, corrupted young libertines. Unlike most first novels, though, Sense and Sensibility doesn't need our indulgence. It's good to go. In the novels to come, Elinor Dashwood will morph into Anne Elliott and Elizabeth Bennet (who will morph into Emma Woodhouse); Edward Ferrars into Edmund Bertram, Mr. Knightley, Henry Tilney, and Captain Wentworth; Willoughby into George Wickham and Henry Crawford. But the characters in Sense and Sensibility stand convincingly on their own, every bit as memorable as their later avatars. If Austen doesn't have quite the Caliban-to-Ariel range of a Shakespeare, she can still conjure up and sympathize with both Mrs. Jennings-the "rather vulgar" busybody with a borderline-unwholesome interest in young people's love lives, fits of refreshing horse sense, and a ruggedly good heart-and Marianne Dashwood, a wittily observed case study in Romanticism, a compassionately observed case study in sublimated adolescent sexuality, and a humorously observed case study in humorlessness. "I should hardly call her a lively girl," Elinor observes to Edward, "-she is very earnest, very eager in all she does-sometimes talks a great deal and always with animation-but she is not often really merry." Humorlessness, in fact, may be the one thing Marianne and her eventual lifemate, Colonel Brandon, have in common. (Sorry to give that plot point away; it won't be the last one, either. So, fair warning.) The minor characters have the sort of eidetic specificity you associate with Dickens: from the gruesomely mismatched Mr. and Mrs. Palmer to Robert Ferrars, splendidly impenetrable in his microcephalic self-complacency. The major characters, on the other hand, refuse to stay narrowly "in character"; they're always recognizably themselves, yet they seem as many-sided and changeable as people out in the nonfictional world. Elinor makes as ambivalent a heroine as Mansfield Park's notoriously hard-to-warm-up-to Fanny Price. She's affecAusten, Jane is the author of 'Sense and Sensibility ', published 1982 under ISBN 9780553213348 and ISBN 0553213342.