Season in Hell and Illuminations 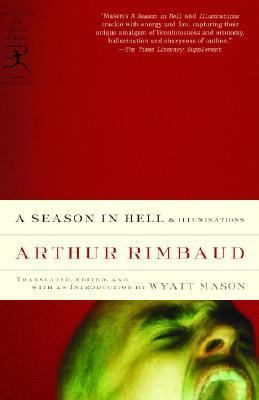 ENGLISH Long ago, if my memory serves, life was a feast where every heart was open, where every wine flowed. One night, I sat Beauty on my knee. And I found her bitter. And I hurt her. I took arms against justice. I fled, entrusting my treasure to you, o witches, o misery, o hate. I snuffed any hint of human hope from my consciousness. I made the muffled leap of a wild beast onto any hint of joy, to strangle it. Dying, I called out to my executioners so I could bite the butts of their rifles. I called plagues to suffocate me with sand, blood. Misfortune was my god. I wallowed in the mud. I withered in criminal air. And I even tricked madness more than once. And spring gave me an idiot's unbearable laughter. Just now, having nearly reached death's door, I even considered seeking the key to the old feast, through which, perhaps, I might regain my appetite. Charity is the key. Such an inspiration proves I must have been dreaming. "A hyena you'll remain, etc. . . ." cries the demon that crowns me with merry poppies. "Make for death with every appetite intact, with your egotism, and every capital sin." Ah. It seems I have too many already: But, dear Satan, I beg you not to look at me that way, and while you await a few belated cowardicesyou who so appreciate a writer's inability to describe or informI'll tear a few terrible leaves from my book of the damned. BAD BLOOD My Gallic forebears gave me pale blue eyes, a narrow skull, and bad reflexes in a fight. I dress as barbarically as they. But I don't butter my hair. The Gauls were the most inept animal-skinners and grass-burners of their day. They gave me: idolatry, a love of sacrilege, and every vice: anger, lustglorious lustbut above all, deceit and sloth. I find even the thought of work unbearable. Masters and workers are all peasants. There's no difference between a hand holding a pen and a hand pushing a plow. An age of hands! I'll have no part in it. Domesticity goes too far too fast. Beggingdespite its inherent decencypains me. Criminals are as bad as eunuchs: so what if I'm in one piece. But. Who made my tongue so truthless that it has shepherded and safeguarded my sloth this far? Lazier than a toad, I've gotten by without lifting a finger: I've lived everywhere. There is not a family in Europe I don't know. Which is to say families like mine which owe everything to the Declaration of the Rights of Man. I've known every young man of means. If only I had one predecessor in French history! But no, none. It's clear to me that I belong to a lesser race. I have no notion of rebellion. The only time my race ever rose up was to pillage: like wolves on carcasses they didn't even kill. I know French history, know the Church's eldest daughter. Had I been a boor, I would have journeyed to the holy land; in my head are roads through Swabian plains, views of Byzantium, ramparts of Jerusalem; both the cult of Mary and of pity on the cross comingle in me amidst a thousand profane visions. I sit like a leper on broken pots and nettles, at the foot of walls eaten away by sun. Later, I would have been a mercenary bivouacking beneath German nights. But there's more! I dance on the sabbath, in a red clearing with old women and children. I don't remember anything prior to this earth and this Christianity. I don't see myself anywhere but in that past. And always alone; without family, speaking what language? I neverRimbaud, Arthur is the author of 'Season in Hell and Illuminations ', published 2005 under ISBN 9780679643272 and ISBN 0679643273.