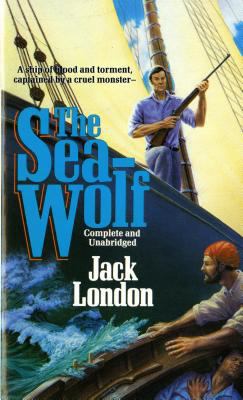 Chapter One I scarcely know where to begin, though I sometimes facetiously place the cause of it all to Charley Furuseth's credit. He kept a summer cottage in Mill Valley, under the shadow of Mount Tamalpais, and never occupied it except when he loafed through the winter months and read Nietzsche and Schopenhauer to rest his brain. When summer came on, he elected to sweat out a hot and dusty existence in the city and to toil incessantly. Had it not been my custom to run up to see him every Saturday afternoon and to stop over till Monday morning, this particular January Monday morning would not have found me afloat on San Francisco Bay. Not but that I was afloat in a safe craft, for theMartinezwas a new ferry-steamer, making her fourth or fifth trip on the run between Sausalito and San Francisco. The danger lay in the heavy fog which blanketed the bay, and of which, as a landsman, I had little apprehension. In fact, I remember the placid exaltation with which I took up my position on the forward upper deck, directly beneath the pilot-house, and allowed the mystery of the fog to lay hold of my imagination. A fresh breeze was blowing, and for a time I was alone in the moist obscurityyet not alone, for I was dimly conscious of the presence of the pilot, and of what I took to be the captain, in the glass house above my head. I remember thinking how comfortable it was, this division of labor which made it unnecessary for me to study fogs, winds, tides, and navigation, in order to visit my friend who lived across an arm of the sea. It was good that men should be specialists, I mused. The peculiar knowledge of the pilot and captain sufficed for many thousands of people who knew no more of the sea and navigation than I knew. On the other hand, instead of having to devote my energy to the learning of a multitude of things, I concentrated it upon a few particular things, such as, for instance, the analysis of Poe's place in American literaturean essay of mine, by the way, in the currentAtlantic. Coming aboard, as I passed through the cabin, I had noticed with greedy eyes a stout gentleman reading theAtlantic, which was open at my very essay. And there it was again, the division of labor, the special knowledge of the pilot and captain which permitted the stout gentleman to read my special knowledge on Poe while they carried him safely from Sausalito to San Francisco. A red-faced man, slamming the cabin door behind him and stumping out on the deck, interrupted my reflections, though I made a mental note of the topic for use in a projected essay which I had thought of calling "The Necessity for Freedom: A Plea for the Artist." The red-faced man shot a glance up at the pilot-house, gazed around at the fog, stumped across the deck and back (he evidently had artificial legs), and stood still by my side, legs wide apart, and with an expression of keen enjoyment on his face. I was not wrong when I decided that his days had been spent on the sea. "It's nasty weather like this here that turns heads gray before their time," he said, with a nod toward the pilot-house. "I had not thought there was any particular strain," I answered. "It seems as simple as A, B, C. They know the direction by compass, the distance, and the speed. I should not call it anything more than mathematical certainty." "Strain!" he snorted. "Simple as A, B, C! Mathematical certainty!" He seemed to brace himself up and lean backward against the air as he stared at me. "How about this here tide that's rushin' out through the Golden Gate?" he demanded, or bellowed, rather. "How fast is she ebbin'? What's the drift, eh? Listen to that, will you? A bell-buoy, and we're a-top of it! See 'em alterin' the course!" From out of the fog came the mournful tolling of a bell, and I could see thLondon, Jack is the author of 'Sea Wolf ' with ISBN 9780812522761 and ISBN 0812522761.