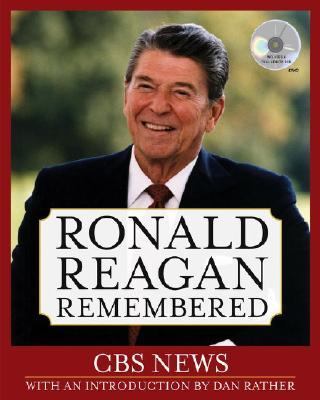 Introduction by Dan RatherThough the twenty-first century is not yet a decade old, the twentieth century already seems a distant memory. Because of this sense of remove, we may now be able to appreciate, in a way that we could not at the end of his second term, just how completely Ronald Reagan embodied what is called "the American century." Born in 1911, he held memories that few alive today can claim. The small-town America about which President Reagan would often wax nostalgic was not a rhetorical fabrication; it was the reality that young Ronald Reagan knew as a boy. He came of age during the Great Depression and served with the Army Air Force Motion Picture Unit during World War II. He acted on the silver screen during Hollywood's golden age. Amid the strife of the 1960s, he was the governor of California known for locking horns with antiwar protestors. Ronald Reagan was a man who was fully a part of the era in which he lived, an era that left an indelible stamp on the American culture and psyche. By the time Reagan was elected president, his understanding of this country and its major currents of thought and feeling was innate. Even if one discounts all his considerable rhetorical skill, President Reagan did not have to reach to connect with his fellow Americans: if the times really do make the man, President Reagan was as American as they come.This quality may well have been at the heart of President Reagan's political success, the substance that informed his considerable blessings of easy communication. Many have called President Reagan the Great Communicator, and the label sometimes grates on his partisans, who see in it a reluctance to credit the Reagan ideology. But to Reagan detractors and defenders alike, one might ask: Just what is leadership, in a democracy, but the harnessing of policy to the horse of persuasion? In a successful presidency, these realms are inseparable, and this was something that President Reagan always seemed to grasp.In the public role of the presidency, Ronald Reagan knew how to personify the American spirit of the times, and reflect it back to an American public that generally liked what it saw. He spoke to an elevated sense of the American self, and he did so convincingly, in language that carried neither a self-conscious populist pose nor a high academic gloss. To recall President Reagan's speeches -- his first inaugural, his eulogizing of the Challenger crew, his farewell address -- is to remember a time not so long ago when words still reached out to the American imagination. Today's focus group-tested soundbites pale by comparison.For many Americans, for many Republicans and Democrats alike, Ronald Reagan holds a privileged place in America's recent historical landscape. And in this presidential election year, no sooner had President Reagan left us than each major-party candidate sought to lay claim to his legacy: one through ideological and policy affinities, the other on the issue of federal funding for stem-cell research for treating Alzheimer's and other neurological diseases. On June 11, 2004, as the sun set over the American continent, a nation said its last good-byes to Ronald Wilson Reagan, fortieth president of the United States. On a California hillside facing the Pacific Ocean, a site rich in symbolism for a onetime movie star and two-term governor of the Golden State, President Reagan's remarkable journey came to its end, with history trailing in its wake.In the preceding days, America had witnessed a state funeral in the nation's capital, a rite this country had not seen in a generation. As the caisson bearing President Reagan's casket made its way past the many thousands who lined Pennsylvania and Constitution avenues, a certain air of triumph mingled with the solemnity of the occasion. As President Bush would say in the eulogy he delivered at the National Cathedral, America had lost Ronald Reagan only daysCBS News Staff is the author of 'Ronald Reagan An American Tribute', published 2004 under ISBN 9780743271530 and ISBN 074327153X.