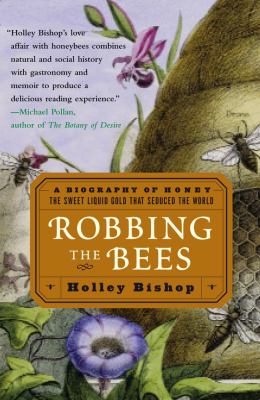 Introductions For he on honey-dew hath fed,And drunk the milk of Paradise.Samuel Taylor Coleridge, Kubla Khan Everyone should have two or three hives of bees. Bees are easier to keep than a dog or a cat. They are more interesting than gerbils.Sue Hubbell, A Book of Bees Nobody disputes the role of dogs as man's best friend, but a convincing argument can also be made for the honey bee.Martin Elkort, The Secret Life of Food Until six years ago, I had no acquaintance with bees or honey. No childhood memories of painful stings while playing in the yard or climbing a tree, nor neighborhood friends who could boast of such a dramatic experience. There were no eccentric suburban beekeepers to spy on in my early days, no busy oozing tree nests, and never an ounce of honey in the kitchen of the house where I grew up. Preferring the Hardy boys and Nancy Drew to Winnie-the-Pooh, I had not learned to appreciate bees or honey. Bees were a vague, somewhat menacing presence, like malarial mosquitoes or the bogeyman. I had never personally met any and was perfectly happy to keep it that way. Then, as a harried adult in need of a peaceful getaway, I bought a house in Connecticut two hours north of my cramped rental apartment in New York City. I fell in love with the landscape and solitude of the country, with the shade of giant maples instead of skyscrapers, and with the sounds of woodpeckers and doves waking me in the morning rather than the roar and honk of traffic. The house is over two hundred years old, a quaint brown clapboard colonial, rich in history and nature, which I set out to explore. Soon, I learned that my little haven, with its steep woods, rocky ledges, and spring-fed cattailed pond, had once been a tobacco farm. Giddy with fresh air and a pioneering do-it-yourself fever, I fantasized about becoming some kind of farmer myself. I toyed with visions of a giant vegetable garden, an orchard, and a produce stand. I thought about acquiring sheep and making cheese and sweaters. Somewhere I read that one acre of grazing land can support one dairy cow and did the math on an unlikely herd of cattle. In the midst of my very improbable farm dreams (this was, after all, a part-time project, and I am essentially lazy), I went to visit my friend Ace, an expert in part-time projects. He introduced me to two white boxes of bees he kept in a meadow near his house. Immediately I was captivated by the idea of low-maintenance farm stock that did the farming for you and didn't need to be walked, milked, or brushed. The amount of gear and gadgets involved also appealed. Ace handed me a plastic bear full of his most recent harvest, and when I tilted it to my mouth, head back, eyes closed, I really experienced honey for the first time, standing next to its creators. In that glistening dollop, I could taste the sun and the water in his pond, the metallic minerals of the soil, and the tang of the goldenrod and the wildflowers blooming around the meadow. The present golden-green moment was sweetly and perfectly distilled in my mouth. When I opened my eyes, tree branches and blossoms were suddenly swimming and swaying with bees that I had somehow not noticed before. Bees hopped around blooms in a delicate looping minuet. Determined to have sweet drops of honey and nature on my tongue on a more regular basis, I resolved to host bees on my own property. Keeping bees was clearly the most exquisite way to learn about my land, farm it, and taste its liquid fruits. As visions of sheep and cows faded away, I dropped my head back again and opened my mouth for more honey. That is how my love affair with bees and their magical produce began. Like most love affairs, it quickly got obsessive. I started to see bees and honey everywhere, and everything reminded me of them. HonBishop, Holley is the author of 'Robbing the Bees A Biography of Honey--The Sweet Liquid Gold That Seduced the World', published 2006 under ISBN 9780743250221 and ISBN 0743250222.