Roaring Lambs A Gentle Plan to Radically Change Your World 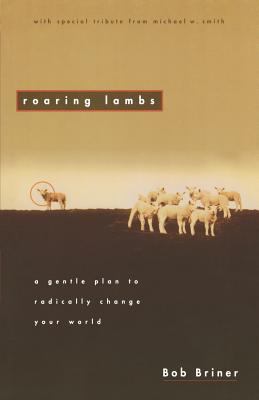 The Shah of Iran had summoned me to meet with him during his international tennis tournament at the sprawling Imperial Country Club on the outskirts of Tehran. As I stood beside the U.S. ambassador awaiting the imminent arrival of the Shah and the Empress, one question continually came to mind: "What am I doing here?" The same question occurred to me as I was flying over on Air Iran, one of the world's most luxurious airlines in the pre-Ayatollah days. Mike Wallace of 60 Minutes was on the flight on his way to interview the Shah, and we chatted about tennis, but mostly I kept pondering the question, "What am I doing here?" This same question had presented itself often in the past. It came as I stood on the sidelines at Shea Stadium as a part of the Miami Dolphins' front office staff before our game with the New York Jets. As I sat in the Royal Box at Wimbledon, it came to mind again. The same question arose as I rode with Akio Morita, the legendary founder of Sony, in his limousine through the streets of Tokyo. When the U.S. ambassador to Australia sent his plane to Sydney to fly a small group of us to the embassy in Canberra, I asked myself that question. And it certainly floated in and out of my mind when tennis great Jack Kramer and I entered the magnificent suite atop Caesars Palace in Las Vegas to negotiate with the hard men who ran the gambling empire. "What am I doing here?" "Why am I here?" Naturally, everyone asks this question from time to time, but coming as I did from humble beginnings - the product of a modest public school system and two very small colleges, it seemed totally preposterous that I should be flying all over the world, hobnobbing with the rich and famous, unless there was something more to life than just fate and chance. For me, the question "What am I doing here?" was more complex and urgent because of one fact. I am a Christian. I am committed to the cause of Christ. I want to serve Him. So what am I doing here? What am I doing on this jet to Paris where I will oversee television production for the great bicycle race, the Tour de France? Why am I doing what I do instead of pastoring a church or training missionaries? As career opportunities took me from coaching six-man football at a tiny high school on the plains of Kansas to some of the most powerful positions in international sports and sports television, I found myself much better prepared to succeed both professionally and socially than I was prepared to succeed as an effective Christian. Even trying to live a life that integrated the Bible with all I was doing, I found myself progressing much more rapidly professionally and socially than spiritually - particularly in doing Christianity, in fulfilling the commands of Christ, in being salt in the world. As I look back it is easy to understand why this was so. Both in business and social settings, I had many mentors and role models, many patterns to follow. Many people were there to teach me and help me. On the other hand, the more I progressed in my sports business career, the more isolated and alone I felt as a Christian. Spiritually, I was a meek and lowly lamb in a world full of lions. The real Christians were people like my pastor, people working full-time for Campus Crusade, Youth for Christ, or Wheaton College, the countless missionaries sent out by my church, Billy Graham, Charles Stanley, Jerry Falwell, James Dobson. These were the ones changing the world. The best I could hope for was to support them in prayer and money. At least that's what I had been taught. The wonderful people who had attracted me to a very small, very conservative church in Dallas, Texas, and who introduced me to the marvelous reality of a personal relationship with Jesus Christ seemed to be both intimidated by and skeptical about one of their own venturing out into the world of big-time professional sports. This just didn't square with their previous experiences. The emphasis in my churchBriner, Robert is the author of 'Roaring Lambs A Gentle Plan to Radically Change Your World', published 2000 under ISBN 9780310591115 and ISBN 0310591112.