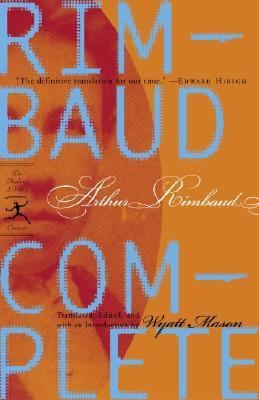 INTRODUCTION Fame is, after all, only the sum of all the misunderstandings that gather around a new name. -rainer maria rilke I We know the face: the delicate features, the pale eyes, the uninflected expression. We know the slight turn of the head, the shadow clouding one cheek. We know the stare, forever directed past us, above us, focusing on some unknown something out of frame. It is an attractive face, but the more we examine it, the more it eludes us. And although it seems somehow benevolent, or at the very least unimposing, it tells us very little. It could belong to a matinee idol, a prince, or the boy next door. It could even belong to Arthur Rimbaud. The face which comes down to us in a photograph snapped by Etienne Carjat in December 1871 was not the Paris photographer's only stab at Rimbaud. Two months earlier, the poet had visited Carjat's studio a first time. A very different face emerged from that session, one we rarely see. In this photo, Rimbaud is dressed just as he would be in the second: the neat, dark coat; the pale vest, buttoned all the way up; the haphazardly knotted tie. But delicate features are not in evidence. The poet's cheeks are chubby. His nose looks twice as wide. His mouth, an inarticulate line later on, is full, its corners downturned. It looks like a bruise. Then there are his eyes. While still notably pale, this time they stare directly at us. Open, but like a wound. The expression seems to say: look at me, come on, I dare you. Were we not assured that this is Arthur Rimbaud, we would be hard-pressed to recognize him. As it happens, this is the photo Rimbaud's contemporaries said resembled him most. Yet in the century since his death, the December photo has become Rimbaud, reproduced in nearly every book devoted to him or his work. The October photo has fallen away. Our preference for the later image is not, therefore, a reflection of how Rimbaud looked in his time, rather how we have come to prefer him to look in ours. Jean Cocteau, describing the appeal of the December portrait, wrote: "He looks like an angel . . . His eyes are stars." Enid Starkie, an early biographer, found a "look of extraordinary purity . . . an astonishing and spiritual beauty." Thus a beautiful face, like how many others before it, helped launch a thousand myths. For in the short span of the century since his death, Rimbaud has been memorialized in song and story as few in history: a half-dozen biographies in English; fictional accounts in celluloid and print; documentaries; popular songs in many languages; numerous settings of his poems to music; even an opera. The thumbnail of his legend has proved irresistible: the boy genius who abandoned writing at twenty; the rapscallion who seduced a married Paul Verlaine; the thug who bullied everyone, even stabbed Carjat; the visionary who took drugs to expand his creative consciousness; the scoundrel who sold slaves in Africa; the martyr who died young. Some of these tantalizing elements may even be true. But while the critical and biographical debate continues, readers are faced with an ancillary difficulty. So accustomed have we become to these variations on the Myth of Rimbaud, that when we turn to the poems themselves it is difficult to keep our preconceptions at bay. We find ourselves looking for the Adolescent Poet here, the Hallucinogenic Poet there, the Gay Poet everywhere. The problem with all of these adjectives is that they put too plain a face on the poems. And the poems vessels of indeterminacy, ambiguity and frequently strange beauty are easily disfigured by a blunt critical blade. But: if we can manage to ignore what we know about Rimbaud or believe we know, if we can focus briefly on what he made rather than what he may have done, the opportunity to explore one of the most varied troves of individual expression in literature awaits us. From the HardcoRimbaud, Arthur is the author of 'Rimbaud Complete' with ISBN 9780375757709 and ISBN 0375757708.