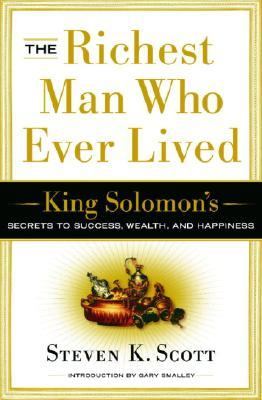 CHAPTER 1 How the Richest Man Who Ever Lived Can Make You Happier, More Successful, and Wealthier Imagine going from a below-average wage to a personal income of more than $600,000 permonth!Imagine losing nine jobs in your first six years after college, and then, on your tenth job, building more than a dozen multimillion-dollar businesses from scratch, achieving sales of billions of dollars. Imagine doing all of this by following specific steps taught by Solomon in the Old Testament Book of Proverbs. In a nutshell, that is my personal story. Now think about it: Before:Earned less than half of the income of the average American wage earner. After:Income rose from $18,000 per year to more than $7 million. Before:Diagnosed a hopeless corporate failure with a success rate of 0 percent. After:A twenty-nine-year career success rate of over 60 percent in an industry where the average success rate is under 1 percent. And just as convincing to me is what happened when I actedcontraryto Solomon's advice. On three occasions, I violated three of his warnings and lost millions of dollars through bad investment decisions. Had I followed Solomon's advice, I would not have lost a penny. I ignored his advice on relationships and watched one of the happiest marriages in America fall apart. Then, following Solomon's advice on relationships, my marriage was restored and today is happier than ever! If following Solomon's advice had worked only a few times in the course of my life, we could call it coincidence. If ignoring his advice and warnings had resulted in a few minor setbacks, we could call it chance. But when following his advice has created such significant personal, business, and financial success year after year for me and for countless others, and failing to heed his warnings has caused heartbreaking personal and financial disasters, even the heartiest skeptic must admit what wise men and kings and queens the world over once acknowledgedthat Solomon was the wisest man who ever lived. Just as there are physical laws that govern the physical universe, Solomon reveals "laws of living" that invisibly govern all aspects of life. Every time you step on board an airliner, the physical laws of gravity and aerodynamics govern your ultimate destiny. If your pilot and the airplane operate in accordance with those laws, you will safely arrive at your destination. If for any reason whatsoever they do not operate in accordance with those laws, you will return to the ground, one way or another. It doesn't matter how you feel about these laws, whether you love them or hate them, whether you choose to ignore them or not; theystillexist and theywillgovern your flight. Fortunately, pilots, aeronautical engineers, and aircraft designers fully understand these laws, and thus they are able to use them to great advantage. They are able to build and fly aircraft that move us quickly, safely, and comfortably to our destinations. If they were ignorant of these laws, no airplanes would be able to fly. Just as there are physical laws that govern the universe, there are laws of living that are just as sure and true. It doesn't matter if you love them or hate them, theystillexist, and theywillgovern your life. Solomon reveals these laws in the biblical Book of Proverbs, and more important, shows us how to use them to our advantage. The laws of gravity and aerodynamics have always existed, but until they were learned and understood, they kept the entire human race on the ground; once they were discovered, they became theScott, Steven K. is the author of 'Richest Man Who Ever Lived King Solomon's Keys to Success in Work And in Life', published 2006 under ISBN 9781400071975 and ISBN 1400071976.