Red and the Black 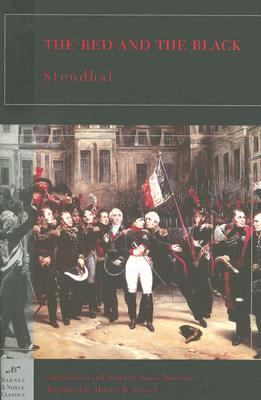 From Bruce Robbins's Introduction toThe Red and the Black Climbing a ladder in the darkness, a young man is about to tap at the window of a woman's bedroom. This tableau, twice repeated inThe Red and the Black, reveals two essential things about the novel. First, Julien Sorel is a social climber, on his way up in the world. And second, seducing the two women who become his lovers, both of them social superiors whose doors he cannot afford to be seen entering, turns out to be the major means of his social ascent. The reader is under no obligation to sympathize with this erotic agenda for career advancement, however accidentally the ambitious young protagonist falls into it, or for that matter with the protagonist himself. Again and again, especially in the scenes of romantic courtship, Stendhal takes pains to show Julien's conduct as animated, if that is the right word, by cold-blooded self-interest more than by genuine passion or desire. A military campaign aimed at conquering the enemy, one of Julien's favorite metaphors for what he is up to, is not a particularly appetizing way to think about love. Why then have generations of tenderhearted readers found this tough-minded novel so compelling? To begin with, it is because Stendhal makes the reader feel how heavy the odds are against ascending the social ladder from the point where Julien starts out. The stubborn incomprehension Julien gets from his peasant father, while it falls somewhat short of monstrous tyranny, does set him up (like Charlotte Bronte'sJane Eyre) as a sort of nineteenth-century Cinderella: a suffering, sensitive, disadvantaged figure with whom it is almost impossible not to identify, at least at the outset. In bringing this fairy-tale structure forward into the dense, realistically observed detail of early-nineteenth-century France (the novel's subtitle is "A Chronicle of 1830"), Stendhal also puts French history itself to work in making his protagonist more palatable. Though the Revolution of 1830 is not in fact discussedthe novel was finished before it broke out, and it was his publisher's idea, not Stendhal's, to use the subtitleto capitalize on reader interest in this topical and momentous eventone can hardly avoid the sense of unbearably oppressive social weather on the eve of a devastating political thunderstorm. In the period after the defeats of Napoleon in 1813 and 1815, conventionally described as the Restoration (the monarchy was restored to power), the term "reactionary" was not a piece of mud-slinging hyperbole. Hard though it may be for a twenty-first-century reader to take in, the French Revolution's proposal that democracy should be realized in the world was still, to its opponents, unnatural and terrifying. The people who ruled France during the Restoration were self-consciously reacting against the democratic idea itself, and not merely against the violence of the terror with which that idea had been visited upon the king and the aristocracy. In restoring the monarchy, the rulers were restoring a natural social order in which, as God willed, one's place was determined by one's birth. Piety, hierarchy, and social immobility were cherished moral values of the age. Seen against this backdrop, Julien looks a lot more sympathetic. He seems to have little choice but to pretend he believes things he doesn't believe, like the dogmas of the church. If he wants to improve his lowly condition, history decrees he must be a hypocrite. In love, as in religion and politics, he must ignore the empty banalitieStendhal is the author of 'Red and the Black ', published 2005 under ISBN 9781593082864 and ISBN 159308286X.